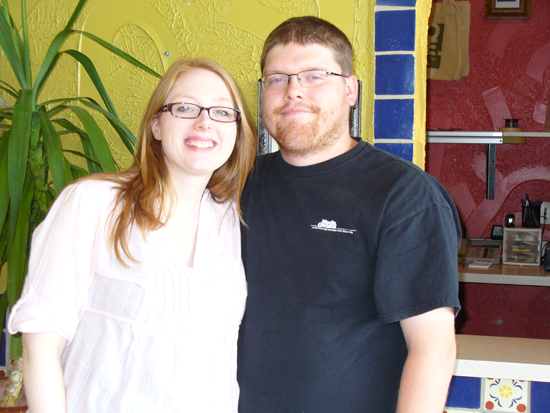 Alicia Wotring Sisk (2006) wanted to be a writer since she was eight years old, living in Granger, Ind. Alicia displays copies of a women’s magazine that she edits and designs. Photo provided

“My third grade teacher would tell me that she knew I was going to be a writer even then,” Sisk said.

Alicia received her first byline in the 10th grade. Her journalism class was assigned to write a news story. She chose to write about a group of football players starting a Bible study, and her article made the school paper.

“After I saw my name in print, I was hooked,” Alicia said.

Alicia was inspired to join the staff of her school newspaper, the Pennant, where she worked for the rest of her high school career.

When it came time to pick a college, Alicia’s only criterion was a Christian college with a journalism program.

“I knew I wanted to go to a Christian school, and Liberty University was one of the only ones to offer a journalism program,” Alicia said.

At Liberty, Alicia majored in communication studies and specialized in print journalism.

Liberty journalism professor Deborah Huff had a great impact on Alicia’s future in journalism, she said.

“Mrs. Huff was an amazing mentor, and I often think back to principles she taught in the classroom when I’m doing my job now,” Sisk said. Rob and Alicia after the arrival of baby Jackson in January 17, 2011. Photo provided

Alicia joined the staff of Huff’s student-led newspaper, the Champion. By her senior year, she was the editor in chief.

“I think working at the Champion gave me the biggest leg up,” Alicia said.
The office also gave her a husband, Rob Sisk (2006).

Rob and Alicia met and started dating while working on the Champion staff in the 2005-2006 school year. He was the news editor when he caught her eye.

Rob was a broadcast student from Mechanicsville, Va., who got a taste of print journalism in Dr. Robert Lyster’s news writing class.

Rob said the class changed his perspective about writing.

“I was never good at writing, but I had a lot of fun in the class. News writing was easier for me than creative writing,” Rob said.

During his freshman year, Rob chose to work on the Champion staff for his practicum and then changed his major to print journalism his sophomore year.

Rob became the news editor at the Champion for their senior year.

“Liberty definitely prepared me, mostly through the variety of subjects I studied. Copy editing, page design, feature writing, magazine writing … it was a well-rounded education,” he said.

After finishing their education in 2006, the two found jobs in nearby towns – Alicia at first and Rob about five months later.

They married in June 2007 and moved to Waynesboro, Va., to be close to the newspapers where they worked.

Rob started as a writer for the News Virginian in Waynesboro in 2006 and was promoted to sports editor in 2008.

His education at Liberty gave him an edge over the competitors for the job.

“I was the only applicant who knew how to use QuarkXPress (page design software), which I learned at Liberty,” Sisk said.

Rob and his writing staff have received the Virginia Press Association award for best sports section four out of five years.

“We are one of the best small community dailies in the state because we know when to get out there and cover more than just the games,” Rob said.

Rob said being a sports editor always keeps him on his toes.

“Today I’m gonna go cover a baseball game, and I have no idea what could happen. It’s exciting,” Rob said.

In the summer of 2011, Rob was promoted to assistant editor at The News Virginian and now leads the newsroom.

Rob also enjoys fishing and working on his car.

“My wife calls me a redneck,” Rob said.

While Rob is covering sports in Waynesboro, his wife Alicia works 40 minutes north at the Daily News-Record (DN-R) in Harrisonburg, Va.

Alicia started almost five years ago as a beat reporter at the DN-R and after about a year she was promoted to assistant feature editor.

“I enjoy helping other reporters craft their stories,” Alicia said. “And I get to do a lot of design work, which I really love.”

A typical day in the life of a features editor is busy. Alicia said she archives that day’s paper, lays out and proofs the next day’s pages, and works on special projects. Some of those projects include a quarterly women’s magazine, a business journal and the weddings and engagements section.

Alicia said she is so busy that she spends more time with her staff than with her husband. The two recently had their first child, Robert Jackson.

Both Rob and Alicia advised journalism students to gain as much experience as they can.

“There are more journalists than jobs. The only way to compete is real experience like freelance writing,” Rob said.