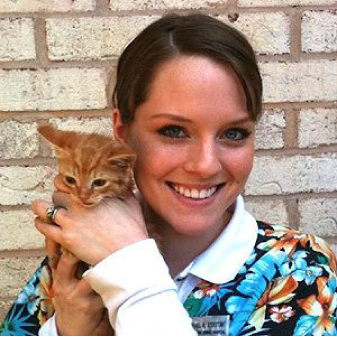 When a tragic apartment fire took the lives of Liberty alumni Rachael Horton and her husband, Aaron, on April 8, it seemed that a beautiful future had also died that day. Horton, a bright-eyed and passionate animal lover, had dedicated seven years of her life to the Gentle Care Animal Hospital in Forest and poured her heart into serving the four-legged patients who sought treatment there.

But new hope has risen from the ashes of heartbreak as friends, family and coworkers honor her legacy with the Rachael Horton Compassionate Care Fund and its first fundraising event, the Rachael’s Paws and Purrs Race.

Friend Teresa Proffitt spent much time at the shelter and knew Horton personally. She has taken it upon herself to organize fundraising for the cause.

“Rachael was truly an angel here on earth,” Proffitt said. “My goal when organizing the Rachael’s Paws and Purrs Race was to create a positive, uplifting event to raise money for a great cause. Even more importantly, to celebrate the lives and honor the memories of Rachael, Aaron and the couple’s cat, Oscar.”

This nonprofit fund can cover up to 50 percent of the cost of treatment and provides financial support for animals with life-threatening illnesses. Medical care for these cases is often expensive and many owners are forced to forgo the life of their beloved pet due to their inability to pay.

While working as an assistant at Gentle Care, Horton witnessed many pet owners reluctantly make this difficult decision.

“The fund was actually Rachael’s idea,” Proffitt explained. “About a week before she died, she wanted a small amount of her paycheck withheld each week to begin the fund. After she tragically lost her life, Gentle Care Animal Hospital started the fund in her honor…to make her dream come true.”

As part of the fundraising, Proffitt organized a 5k and 10k race called “Rachael’s Paws & Purrs,” which was held at 7 a.m. Sept. 5, 2011. The race began and ended in Amazement Square and had over 180 participants, nearly three times RHCCF’s original goal of 50 participants.

Proceeds from the race were dedicated to the fund and more awareness of the cause is still spreading.

“Long term, hopefully, the fund can become even larger to include participation in other states, and maybe one day it will be nationwide,” Proffit said. “We are all committed to the long-term success of the RHCCF to ensure that Rachael’s dream continues to become a reality.”

To learn more about the Rachael Horton Compassionate Care Fund, or how you can get involved, visit www.rhccf.org.