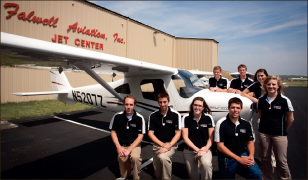 Flight training has a steep price tag, with a full commercial license requiring upwards of $40,000 to $50,000 above normal tuition, room and board. Retired Air Force Brig. Gen. David Young, dean of the School of Aeronautics, has always focused on reducing that cost whenever possible.

“One of my main personal goals, and goals of our school, is to reduce the cost of training to the student, and we continue to find ways to do that,” Young said. “For example, when we bought (Falwell Aviation, now Freedom Aviation) more than a year ago, we were able to lower the cost.”

Starting this semester, the School of Aeronautics took a significant step forward by switching flight costs from out-of-pocket expenses to lab fees that are included in tuition.

“What this did for the students is allow our students to put all of their financial aid assistance and loans on their account at Freedom Aviation,” Young said. “It demonstrated great support by the financial aid office, and it made it much easier for students to start flying right away.”

The impact of the new lab fee system is best evidenced by a dramatic increase in flight hours this year. The school is about to pass 1,100 flight hours in the last 30 days and more than 11,000 for the year — a 4,000 hour increase over last year.

Another significant improvement is the acquisition of a brand new Cessna 162 Skycatcher. The Skycatcher is a newly introduced light sport aircraft and a successor to one of the company’s most popular training models, the 152. The new plane is not only less expensive to fly and maintain, but is also a major asset for the school’s National Intercollegiate Flying Association (NIFA) competition team. The NIFA team has won the last six consecutive regional titles and placed 15th in the nation last year. The Skycatcher will be part of the team’s arsenal when they face off against other top flight schools at Ohio State University in two weeks.

“This airplane is much less expensive to purchase and more economical to operate, which means we can pass those savings on to our students,” Young said. “That’s our ultimate goal, but because of the timing and such that we were able to get this airplane when we did, we’re initially using it for our competition team.”

All of the expense savings and restructuring flight costs as lab fees will both boost enrollment in the School of Aeronautics and help with retention. Prior to the implementation of lab fees, many students would begin the program and fall in love with flying, but they would run out of money and be forced to change majors, according to Young. The Aeronautics faculty and staff are working to end that in the future.

With the acquisition of a new building at the airport, the School of Aeronautics will be completely moving out to the airport locations.