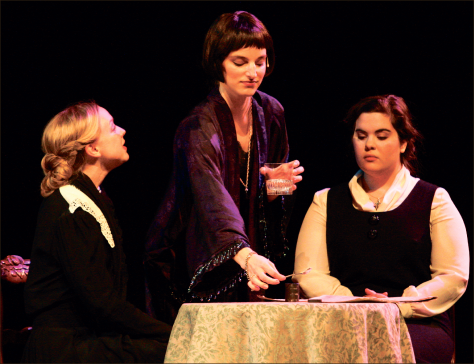 Thunder crackles and booms throughout the first act of “Enchanted April,” as two London women search for meaning and happiness within their marriages and themselves.

It started with a simple dream – a holiday far away from rainy post-World War I England. Housewives Lotty Wilton and Rose Arnott trudge through their daily lives, struggling with boredom and distant husbands. All is well and normal until Lotty decides to pursue the idea and rents a manor in the Italian countryside for the month of April. Ruth is convinced the plan will only lead to disaster for them and their marriages, but Lotty woos her with promises of sunlight, companionship and acres of fragrant wisteria. Ruth relents, and the two search for two other women to join them on their month-long holiday.

The group grows to four after adding a jet-setting young socialite and an austere British lady to their ranks with a wanted ad in the local newspaper. The four set off to Italy for their much needed change of scenery, as well as point of view.

Director Neal Brasher said that even the play’s set was used to emphasize the subtle themes in the story.

“The first act is actually supposed to (look) rather empty,” Brasher said. “The empty stage is supposed to be symbolic of what’s going on in the lives of the two women. They are feeling sort of abandoned, unwanted, and maybe even a bit oppressed by the circumstances in their lives.”

Brasher said that the play, written as a novel in 1922 by Elizabeth von Arnim, focuses on hope and redemption, which is why the play was set in the years following World War I. A running joke throughout the first act implies that the two young housewives look like widows, most likely calling attention to their grim circumstances. The joke also points out the backlash from World War I and the following Spanish influenza epidemic, which killed millions and left millions more widowed or orphaned.

“When we reach the second act, you notice the stage is lighter and brighter, like to sun is shining, as opposed to the gloominess of the first act,” Brasher said.

The story progresses as the four very different women spend their holiday developing new relationships and repairing old ones.

Tickets can be purchased at the Vines Center box office, online or by calling 434-582-SEAT (7328). For more information, visit the Theatre Arts department’s website which can be found through the Splash page.