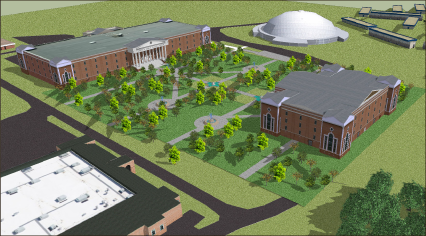 Liberty University kicked off its 40th anniversary, ushering in a new era of growth this week.

Chancellor Jerry Falwell Jr. said Liberty is marking the occasion by celebrating the university’s history and preparing for the future.

“It really is a new era and it just so happens to be our 40th anniversary,” Falwell said. “We’ve come about as far in the last four years as we thought we would in the next forty years.”

Liberty put up 40th anniversary banners around campus and launched a promotional campaign to highlight the university’s distinct characteristics this week.

The celebration will culminate at this fall’s Homecoming and other special events.

“It just dawned on me one day that we are entering into a new era because it is totally different circumstances than we’ve ever seen before,” Falwell said.

The university benefits from access to significant financial strength and increased student growth.

“Our mission of training Champions for Christ remains the same,” the chancellor said.

“But we now have the resources to really achieve our goals in all of these areas and really create what Liberty was intended to be in the beginning — a world class university,” Falwell said. “It’s going to allow us to fulfill our mission in unprecedented ways that we would have never dreamed of doing before,” he said.

During the next 18 months, Liberty will undergo a variety of changes and improvements, Falwell said.

The university and Thomas Road Baptist Church will work together beginning this fall to create a new contemporary service for college-aged young people at the church, Falwell said.

Johnnie Moore will serve as a teaching pastor for Thomas Road, leading the service, which will be open to Liberty and other college students across the region.

Falwell said it is important for Liberty students to connect and engage with a local church.

“It will be the hub for spiritual life on campus,” the chancellor said. The university will begin work on a visitor’s center this spring.

The center, located on the former Hancock building site, will welcome students and families.

The visitor’s center will include representatives from financial aid, student accounts, alumni affairs, and the registrar office.

The center will give visitors a trip down memory lane, housing a Liberty Museum with a room dedicated to each of the university’s four decades and the Jerry Falwell Museum.

A commons area will be built behind DeMoss Hall with a state-of-the-art library, Falwell said.

“I wanted to do something for academics similar to what we did for athletics with Williams Stadium,” Falwell said.

The university also plans to build a 100,000 square foot building across the highway from Candler’s Station for a math emporium, online operations, and possibly the School of Worship.

“That’s going to be a big project,” Falwell said.

A new athletics practice facility will be built behind the Vines Center, along with a physical education building adjacent to the LaHaye Center.

The university will complete renovations on the third and fourth floors of DeMoss, providing additional classroom space.

Falwell expects the university to boost its residential enrollment in the coming years.

“If financially everything continues to perform as it has the last few years, we are going to go ahead and increase the size of the residence program by several thousand students,” Falwell said. “That’s a huge investment, but I don’t think it’s that far away.”

Falwell said the university is better equipped to grow and further its mission.

“We are really poised to accomplish our mission in ways we never thought was possible so early in our history,” Falwell said.

”Now that we have all these resources, we have to make sure we wisely invest them for Liberty’s future,” the chancellor said.

The university launched www.liberty.edu/40years to promote the anniversary and upcoming events.