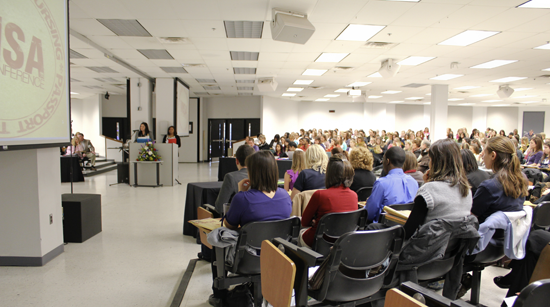 The conference usually takes place at a hotel, but Diane Peng, VNSA secretary, said the organization wanted to take a different approach for this year’s event.

“We’ve had previous conferences at Virginia Beach and Charlottesville but we wanted to try a different atmosphere,” Peng said. “We generally like to switch locations because it’s hard to find a very central location.”

Participants from schools all over Virginia including James Madison University, Longwood University and Lynchburg General School of Nursing filled DeMoss Hall for the daylong event.

VNSA treasurer, Emily Fritter, said she was pleased with the change in environment.

“It was definitely a whole lot cheaper than doing it at a hotel,” Fritter said. “This has been a really great facility and the space has been accommodating.”

Fritter added that having the conference on a university campus also allowed for a greater sense of community among Virginia nursing students.

Ashley Kline is a junior at Liberty who was glad to have the chance to show off a nursing department that she loves and to learn from other schools’ professors.

“Our professors here are wonderful, and their knowledge is so great, but hearing from other professors is always a privilege,” Kline said. “It’s a cool thing, and I think it’s great that it’s here because it’s so close. I hope they do it here again next year,”

Students were able to sit in on lectures about the nursing field and their options after graduation. All the lectures, including ones on anesthesiology, burn care, flight nursing, and critical care, were taught by professors from nearby schools and medical professionals.

Terry Page is the head of the Liberty Nursing Student Association (LNSA), the school’s chapter of the VNSA. She said that these seminars allow students the chance to hear important information from veterans in the field.

“The state conference lets them see what job opportunities will be out there,” Page said. “(At) the workshops, a student can hear an experienced nurse in that field talk about it, and it will help them decide if they want to go into that field and can give them a better understanding of what they’re going into.”

Agnieszka Chmura is a senior at Radford University who said that attending the lectures opened her eyes to different options.

“I really benefited from the CRNA (Certified Registered Nurse Anesthetist) lecture because that’s what I want to do,” Chmura said. “(The lectures) give you a lot of opportunities that you didn’t know about and they tell you about the different positions in your major so that really helps.”

Chmura also said that hearing from keynote speaker, Dr. Rosie Taylor-Lewis, and other professionals, was inspiring.

“Their stories about how they helped other people and their experiences makes me feel better and prepares me for what I can do in that situation,” Chmura said.

In addition to seminars, conference attendees could also talk to vendors from different graduate schools and medical programs about opportunities and jobs. Representatives from places such as the Mayo Clinic, International Service Learning, Nursing Steps and CampusRN were available to take students questions and give them advice and direction.

Peng hopes that students who attend the event can come away not only more educated but also with an understanding that the nursing field is expanding.

“It just reaffirms that there are so many specialties,” Peng said. “Nursing is such a versatile career and such a broad profession that encounters so much. It has so many areas of growth and opportunity. “

The LNSA also hosted a food drive, encouraging schools to bring canned foods to the conference to be donated to the Blue Ridge Area Food Bank.