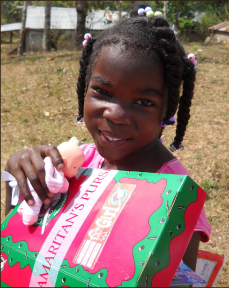 Resulting from the support of the Lynchburg community thousands of underprivileged children around the world have been given a chance to experience Christmas through the work of Operation Christmas Child (OCC).

Students across Liberty University’s campus have shown an exponential amount of compassion through their actions this Christmas season, according to OCC representative Sherry Mcfaden.  More than 1,100 shoeboxes were received from the Liberty donation centers, which is a 250 box increase from last year.

Each year hundreds of students join together with the community to make the reality of Christmas come alive for children in need all over the world through the efforts of OCC.

OCC is a campaign of Samaritan’s Purse that offers children the opportunity to experience Christmas, often for the first time in their lives, by empowering the community to join together and create shoeboxes that are sent across the world to the children in need.

“Since its inception (in 1993), OCC has delivered over 77 million gifts to children in poverty-stricken situations,” Mcfaden said.

This Christmas season OCC partnered with Liberty and the Lynchburg community to make the dream of hope a reality for children worldwide.

“This year in the Lynchburg area, residents collected nearly 18,000 shoe box gifts, which is a 17 percent increase from 2009,” Mcfaden said.

“Making a box is important because it gives children the opportunity to receive a gift they may have never received before or ever will again in their lives,” Liberty student Bethany Smith said after visiting the Samaritan’s Purse warehouse in North Carolina where OCC sorts and distributes the Christmas boxes. “It gives us the opportunity to share the love of Christ with people who may never hear. It is our privilege to be a part of that sort of thing.”

Thanks to the efforts of the Lynchburg community and communities across the nation nearly 2.6 million boxes have already been processed this Christmas season.

The boxes will be shipped to 130 different countries.

“Around the world, children’s lives will be changed by the gifts they receive because Liberty University students chose to give this Christmas,” Mcfaden said.