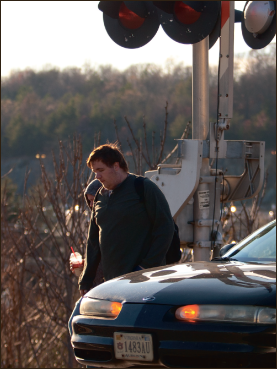 The RISK — Sgt. Kathryn Allen has clocked trains zooming by campus at 82 mph.

A few years ago in Virginia, a grandmother and her grandson walked down to the railroad tracks to flatten a coin.

They put the coin on the tracks and waited for the train to pass. When the train flew by, it shot the coin through the air and straight into the young boy’s skull, killing him.

In the 1970s, some Liberty University students were crossing the railroad trestle near Riverside Park, walking from Lynchburg to Madison Heights. A train approached them crossing the trestle. They had nowhere to go and gambled a jump. They did not survive.

“Since 1990, there have been over 5,000 people killed while trespassing on railroad rights-of-way and property,” according to an Operation Lifesaver brochure Sgt. Kathryn H. Allen of the Liberty University Police Department (LUPD) is passionate about railroad safety.

Allen, a seven-year veteran of LUPD, was honored this July with one of the annual Governor’s Transportation Safety Awards for her outstanding promotion of rail safety  and volunteer service.

She says her passion stems from her maternal nature.

“I have eight kids, many are college age or older. As a parent of LU kids I’d want someone looking out for them,” Allen said.

According to Allen, the police department has received many e-mails and phone calls from concerned students, faculty, staff, parents and visitors to campus who see students zipping their cars around lowered crossing arms and crossing tracks illegally.

Allen believes the only weapons to combat students’ violation of highway-rail grade crossings and railroad rights of way and properties laws that prohibit trespassing on tracks or crossing in undesignated areas are to inform students and enforce laws.

“The evidence of students being (on the tracks) is overwhelming. We won’t catch everyone. It is their safety we are looking out for,” Allen said.

Allen specifically mentioned cars that are stopping on the tracks trying to get off campus and onto Wards Road.

Students apparently are unaware of the great risk posed by illegal crossing of train tracks, Allen said. Students who cross illegally flirt with the possibility of misjudging the distance of the train and getting hit.

Train tracks can be optically misleading and trains sometimes appear farther away and slower moving than they are, according to Allen.

Pedestrians who walk between the tracks are often unaware that each train overhangs the track by about three feet, so it is also possible to be injured between passing trains.

“The laws are there for their safety.  The biggest fear of engineers is someone walking on the tracks or crossing in front of them and not being able to stop.” Allen said.

Allen has clocked trains zooming by campus at 82 mph.

Often students will cross the tracks using their iPods or cell phones. Allen stressed that students must be alert when crossing tracks or they will not see or hear a train approaching.

Allen informed students that if the crossing arms remain down for an extended period, there is a number on the post they can call to contact a dispatcher. The dispatcher will find out why the arm has remained down and remedy the problem safely.