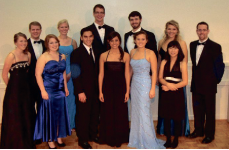 Students who participated in the recital were first nominated by the faculty and then auditioned in front of three judges. For this year’s performance there were about 30 students to audition. Students perform only classical repertoire, which is the department’s academic focus. The audition process guarantees that the best of each department are represented.

“It doesn’t matter what they’ve done before, it’s what happens right there,” Music and Humanities Department Chairman Dr. John Hugo said. Hugo compared the recital and audition process to the Olympics, in that it is something that the students continuously prepare for.

The auditions are not only hard on students. The judges are also faced with the tough task of selecting the students that show the highest quality of performance.

“They are up there and we say ‘these are the best of the best’ and they have to prove it,” Hugo said.

Leah Melfi is a senior in the music department and attends most of the student performances. She believes it was a learning experience because students get to see each other’s techniques and that it was a good opportunity to help support fellow classmates.

“We are able to hear different styles of music and appreciate all the hard work that people put into their craft,” Melfi said. “(It was) an accurate representation of our department and the talent we have.”

After the intense audition process and high pressure environment, students have the opportunity to showcase their talents, according to Hugo.

“You work really hard, you get talent from God, you develop that talent and then we get to see it,” Hugo said.