Who will hold Congress when the dust clears? 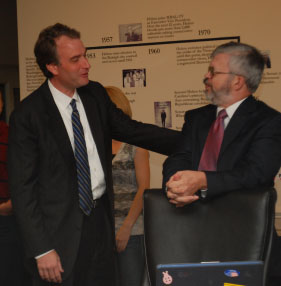 “With 32 days until the election things are very tense in Washington, D.C. People are very charged, and new scandals are breaking daily, Republicans are trying to focus on the economy and Democrats are trying to portray Republican and tea party candidates as extreme, this is the current narrative of Washington,” Scott Whitlock of the Media Research Center said.

The significance of the 2010 midterm election is that every congressman is up for reelection. One third of the Senate is up for re-election. This means that after the ballots have been counted on the evening of Nov.  2 America could have an entirely new House of Representatives.

The election could change control of the House and the Senate. In each respective house of Congress the majority party has control over who serves on the committees, which means that the party will have power over investigations.

For instanceCongressman Darryl Issa (R-Calif.) claims he wants to have investigations on Obama campaign officials, on any sort of Democratic scandal in the last two years if he becomes chairman of the House Oversight and Government Reform Committee in 2011, according to an article in Politico.com by James Hohmann and Jake Shermann, “That will make all the difference in the world. I won’t use it to have corporate America live in fear that we’re going to subpoena everything. I will use it to get the very information that today the White House is either shredding or not producing,” Issa said at a dinner, according to Politico.com.

There are 51 seats needed for a majority in the Senate. Currently, Democrats are ahead in polls in maintaining control of the Senate according to RealClearPolitics.com. Democrats are expected to take 48 seats, 44 of those seats are considered not up for re-election. Republicans are expected to take 46 seats, with 35 seats considered safe or not up for re-election.  GOP candidates would have to win all six of the tossup states that include Wash., Calif., Nev., W. Va., Colo., Ill. and Conn.

“If Republicans take back the House and Senate on November, the Obama administration will be over on Nov. 2.  Not much is going to get done. It is going to be gridlocked,” Whitlock said.

In the Virginia’s 5th district, incumbent Tom Perriello is expected to lose his seat to state Senator Robert Hurt (R) according to RealClearPolitics.com.

BELL is a news writer.