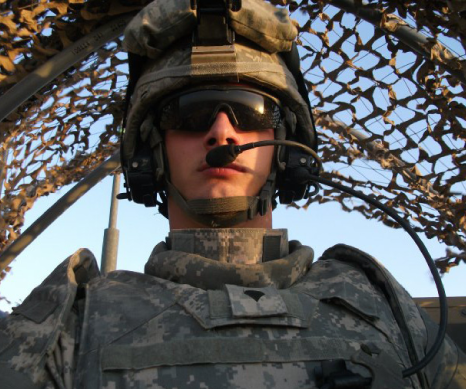 Camaraderie — (Above) Davis served as a gunner with the 1-116th Infantry Battalion in Iraq for seven months. (Left Below). Davis enjoys the company of a fellow soldier while on patrol. (Right Top) Davis is pictured with other members of his Battalion. (Bottom right) Fellow Liberty student Taylor Upchurch served alongside of Davis in Iraq.

When Specialist Curtis Davis returned from Iraq in August, his life was nothing short of uncertain. Due to his late arrival back at Liberty, Davis was unable to finish paperwork to begin the fall semester. To add to the uncertainty, Davis also decided to switch his major from criminal justice to nursing.

“One of the reasons to consider switching is the bigger opportunity out there, especially for a male nurse,” Davis said. “I’m looking into my future for that but I am also looking at maybe staying in the military.”

Davis has also been met with difficulty on the job front and has been actively seeking a job since his arrival home.

Looking towards his future, Davis said that nursing will allow him to juggle both the military and civilian life.

“Being in the National Guard makes it easier because we only take one weekend a month so I could still take a civilian job with nursing,” Davis said.

Davis said that is has been easy returning home but misses the friendships that he formed with fellow soldiers while in Iraq.

“(I miss) the camaraderie — being able to be with friends all the time where as here it’s not so much because of school,” Davis said. “Once I get back in next semester maybe some of that will come back.”

While in Iraq, Davis continued his spiritual accountability with fellow Liberty comrades who met regularly for Bible study.

“A couple of my buddies from Liberty were there with me and they had started a meeting on Mondays and Saturdays,” Davis said. “We had bible study and worship so we carried on a little church group, I guess you could say.”

According to Davis, the friendships he forged while in Iraq helped his battalion during times of pressure.

“There were probably a few times that everyone felt a little weary or not really confident, but we all knew each other and knew that the other would be there for one another.”

Davis said his return is not only a relief to him but also to his friends and family that constantly worried for his safety.

“A lot of people have said they can sleep more now that I’m back,” Davis said.

OVERHULTZ is the asst. news editor.