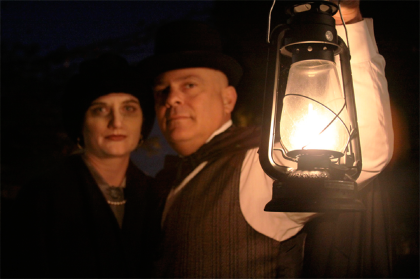 GHosts in your backyard — Lynchburg’s Historical Society hosts its annual ghost walk throughout the month of October. The ghost walk features ghost legends native to Lynchburg.

Lynchburg’s reputation as a town full of historic Civil War landmarks and stories also comes with its fair share of stories about things that go bump in the night.

Sally Schneider is the executive director of the Lynchburg Historical Foundation and started the first Historic Lynchburg ghost walk about eight years ago.

“It’s something different and important to the historical foundation, and this is really part of the history of the people who lived in these houses,” Schneider said. “Years ago people died in their houses … I think that’s why we get so many ghost stories.”

The tour, which was sponsored by Tharp Funeral Home and Crematory, ran from 6:30 p.m. to 8:30 p.m. Every 15 to 20 minutes, the ghost walk started at the Federal Crest Inn and went throughout the neighborhood, ending at the inn where light refreshments were offered on the porch.

The tours are led by guides, dressed in clothes from the period, who tell historical ghost stories at different houses.

Members of Liberty University’s Victorian Society dress in period clothing and follow the tour, according to Schneider.

For the attendees, the walk is not only entertaining but is historical and informative.

Todd Hunley, a local attending the ghost walk for a second year, enjoyed the history of the walk and even though he does not believe in ghosts, he enjoyed the atmosphere and learning about Lynchburg history.

“The history was fascinating,” Hunley said. “The guides are very knowledgeable.”

The tickets were $10 for adults and $5 for children. All proceeds went to the Federal Hill Historical Society and the Lynchburg Historical Foundation.

According to Schneider, the ghost walks are held on different hills throughout Lynchburg. Next year, the foundation will hold the walk on Diamond Hill.

Beth Scott, a local of Federal Hill who was dressed in era costume as a ghost, has been working with the tours for several years.

“I enjoy all the people and how they get into the stories while walking through the neighborhood,” Scott said.

People lined up by the inn waiting for their tour to start, commenting on the irony of the full moon and enjoying the festively decorated neighborhood.

In the past, the event had about 400 people attend, according to Schneider and many people throughout the neighborhood participate.

The foundation was established almost 40 years ago and puts on events such as the ghost walk to encourage and promote the history of Lynchburg as well as receive donations.

POWLEY is a feature reporter.