In our current society, social media has become so prominent and almost necessary for us to function. When we wake up each morning most of us check social media first thing to see what has happened overnight. A social media platform that has exploded over the past couple of years is TikTok. TikTok is an app where you can record 15-second to 3-minute videos on any topic you would like; even stand-up comedy.

Live comedy shows have become less popular over time, so many comedians have participated in uploading their skits to the app such as Jason Cheny, Andrea Jin, and Dustin Nickerson. The videos are clips of their live shows. Still, it is nice because they are able to repurpose their content and share it with a bigger audience that either was not able to attend due to distance or reach new people that have a similar humor to the comedians who actively post. During the height of the pandemic, the clubs for comedy shows were closed, so many live creators moved to Tik Tok to continue to make income as well as reach their audience and new people during a difficult time.

Old or new comedians being on TikTok is beneficial for the creators because it gives the creator full creative control of their content to make sure their jokes land as intended. It also prevents the comedian from saying something possibly offensive and getting, according to our culture today, “cancelled.” Comedians being on TikTok allows them to edit their sets to make it look smoother and more professional. It prevents mistakes being shown like the infamous “uh/um” or pauses. Despite the fact that some argue that broadcasting standup on TikTok dilutes the art form’s originality, it is recognized that it would reach a much larger audience rather than if it were live.

According to Dustin Nickerson’s website, he is “the world’s most average person.” A comedian who performs in over 300 shows a year, his videos have been viewed over 20 million times, and he has appeared on Comedy Central, Hulu, Fox and Netflix alongside Kevin Hart. Through his jokes on marriage, having children, culture, growing up and always being called “Justin,” Dustin invites you into his world. Many others have used terms like “original,” “honest,” “poignant,” “observational,” “relatable” and “engaging” to describe Dustin’s brand of humor.

Bringing Dustin Nickerson to the stage of Liberty University provides a strong sense of community amongst our peers by letting us put aside our school induced stresses like homework, an upcoming exam which you should probably be studying for, or an essay. With events such as this we can come together for an hour and relax, laugh together, and even learn something new. 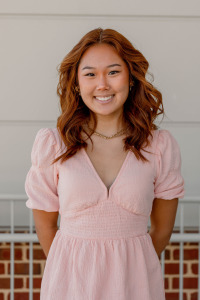 Pimm is a junior majoring in Digital Media & Journalism. She enjoys being a part of the blog team and getting to write about topics she is passionate about.