Before we start throwing tomatoes and lighting pyres, allow me to just say that I love Friends. I love the humor and camaraderie of six friends all (unrealistically) living and thriving in New York City. What’s funny is that when my parents were first dating and married, they loved watching Friends! So, you can imagine their surprise and mild confusion (maybe some concern too, that’s valid) when I started binging it in my teens. Naturally, when I did start watching Friends more often there was a bundle of light within me, it was the dream to visit or move to New York City and it got brighter and brighter with every laugh track. Finally, this past summer, I had a perfect opportunity to go to the city for the weekend – for the very first time! A quick background: I live in the middle of nowhere with three cats, a very old horse and a donkey. I had never seen a skyscraper before, so this was an experience and a half. It was still so much fun and magical, but nothing at all like I expected. It was dirty, a little scary sometimes, very expensive and let me tell you – no coffee shop couches! As much as I love Friends, the show did really ruin the reality of cities everywhere and let’s be honest… probably crushed some dreams.

For one, Friends made New York City seem a lot more exciting but also a lot more chill at the same time. It was exciting in the sense that the friends always had something to do, but chill in a way where it wasn’t too hectic (unless you’re trying to shove a couch up a staircase, that will always be hectic). As fun as they make New York City seem, and believe me, it can be super fun, it still idealizes city living quite a bit. Remember what I said a few seconds ago about the characters in Friends unrealistically living in New York City? Fixate on that word “unrealistically” for a moment. You watch a few episodes of Friends and try and tell me that anything about Ross, Chandler, Joey, Rachel, Phoebe and Monica’s lives in the Big Apple are anything close to realistic. Allow me to set the scene: we have Rachel, a waitress and later a stylist in New York City, who is somehow able to afford a massive two-bedroom apartment with Monica, who is a chef. Listen, I used to want to be a chef. You may be asking, “Hannah, since you wanted to be a chef soooo badly, why aren’t you in culinary school right now?” Valid question. I would be, if chefs made any money at all. Monica starts out as a chef at a regular restaurant, not Gordon Ramsey (although I bet he’s an advocate for sticking a whole turkey on heads too – an idiot turkey?). In the show, Monica and Rachel paid $200 a month in rent. Spit take, what? Listen, y’all. I get that it’s nearly thirty years after Friends started, but $200 will barely (if even) get you a hotel for one night in NYC. Trust me, I faced that harsh reality.

We need to move away from rent prices before I bust a vein in my forehead. Now this next one this isn’t too big of a deal, but I think something needs to be said about the frequent visits to Central Perk and the constant availability of an entire couch. The only couch in the shop, always free for six friends to claim for an entire night? And they never get yelled at? Not stereotyping New Yorkers to be super mean people, but I wouldn’t say they’re extra nice either. This is another area we can argue that Friends lowkey ruined the city. You have to admit, they made the city look a lot friendlier than it is. Again! New Yorkers aren’t particularly mean, I think they’re just used to having to have a hard outer shell. Think about the movie Elf, where Buddy (the elf in question) went to New York City for the first time and had a few rude awakenings. One lesson we can take from his experience is to not go calling other people elves willy nilly – especially not angry elves. Despite all of Friends’ faults, I could go on for days about how much I love it and admittedly, it is my guilty pleasure.

All unrealistic idealizations of rent and couches aside, there is something about Friends that I think we should all keep in mind. No matter where you are for the holidays, whether it’s in your small hometown or massive, big city, or Tulsa, or even if there’s a giant armadillo celebrating with you… The best place to be for the holidays is with the ones you love. That standard is never unrealistic. So this Christmas, no matter where you find yourself, be sure to do the best you can and savor the moments you have with the people you love. Remember to call your mom, practice your New Year’s Eve dance routine (the OG’s will know), and have a very Merry Christmas. 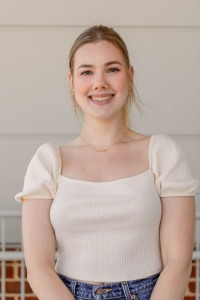 Written by Hannah Clark
Hannah is a senior studying event planning and has plans to soon be a professional wedding and special events planner. She loves using writing as another way to express her creativity and in her free time, she loves to play video games, bake, and play fetch with her cat, Gidget.