It’s not lost on any of us that we are currently living in a culture that greatly values individual expression. This isn’t a new concept by any means, but never has there been so many avenues of expression so readily available to us while being so widely encouraged. There are endless ways for any of us to convey our individual personalities and interests through a thousand different subgenres of niche music, fashion trends that fit nearly any style, the convenience of high quality photography and videography in our pockets, and endless open forums of social media platforms for any loose thought that springs forth from our cerebrum. While these forms of creativity often ebb and flow, spawning and fading at any given moment, there’s one (increasingly) common practice that remains slightly more permanent: the ink on our skin. Though this trend is literally etched into our bodies (weird word picture, sorry), it still very much is a trend in the sense that the way our culture has perceived, and accepted tattoos has changed over the course of the last few centuries.

Today, we view tattoos drastically different than western culture did less than even 40 years ago (I mean, it was illegal to give someone a tattoo from 1967 to 1997 in New York City[1]). If you’ve felt the sting of the needle once yourself (or three times like myself) then it’s very possible you’ve also experienced the indignation or disappointment (so much worse) of a parent or older family member because of your decision. Again, the public acceptability of tattoos was a lot different just a few generations ago. Let us get a little context going here.

Tattoos generally found their way to America through sailors returning from the South Pacific and picking up the local practices. Moving from sailors to soldiers as a form of identification in the event of their death, tattoos were predominantly seen on members of the armed forces in the 19th century.[2] Throughout most of the 20th century, tattoos, although growing in popularity in the American populace, were generally frowned upon and adamantly opposed in the workplace. Change truly began to brew when Rock and Roll took an iconic place in American culture in the 1980’s, and along with it, the growing prevalence of piercings and body ink. Celebrity A-listers sported ink more and more in the 90’s, taking what was once seen as, “a barbaric survival, often associated with a morbid or abnormal personality”[3], into being considered, “the height of fashion across America in the early ’90s.”[4] In more recent years, social media platforms such as Instagram and Pinterest have given tattoo artists massive exposure starting a domino effect of the public’s interest in tattoos, more parlors being opened, artistic ability increasing, and in turn, the growth of normality of body ink.

Now, it should be said at this point that I have no intention in this piece to advocate for or against getting a tattoo. From what I previously stated before, I obviously have a clear opinion of my own regarding them. There’s also been some opinions in the Christian community surrounding tattoos, so I’d like to shift the conversation that way instead.

If you’ve spent time in a more traditional Christian environment, then you’ve likely been acquainted with a view leaned more towards opposition to tattoos. However, similar to trends we’ve followed up until this point, the perspective has shifted in our current Christian culture. As far as on campus culture goes, The Liberty Way (our university’s lovely handbook that lays out policies and student dress code) gives full liberty (pun intended) to students to make the decision for themselves when it comes to getting a tattoo (with the inevitable input of their loving parents). And we can get a glimpse of where the perspective stands within our student body. If you take a stroll through main campus there’s a good chance you’ll encounter at least one, if not multiple, students with visible tattoos. This shouldn’t come as a surprise as recent statistics show that nearly 1 in 4 of those part of Gen Z have at least one tattoo.[5] This could be a bit of a stretch, but the approach to tattoos could almost be seen as one that is similar to the clothing that we wear. This isn’t to suggest that tattoos no longer carry any meaning or symbolism, but there is a greater emphasis on how the art mingles with fashion and style. It’s quite the progression from where the view once stood not too long ago. How it will progress moving forward is not entirely clear, and although the ink may fade over time, I don’t think the movement will be fading anytime soon. 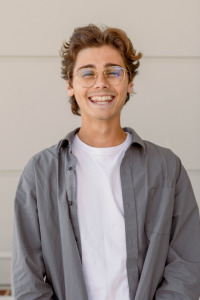 Jordan is a Junior studying Event Planning with a Biblical Studies minor. He enjoys expressing his creativity through words, and sharing his experiences and personality by way of writing. He’s passionate about music, nature, and forming genuine connections with others.