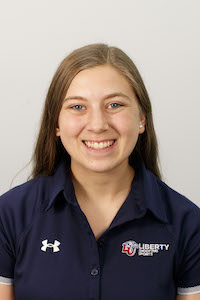 Katherine is a freshman at Liberty University originally from Lynchburg, VA. She is currently pursuing a degree in Nursing. She has been involved in 4-H shooting education and competitive shooting since she was nine years old. Her favorite events are precision air rifle, air pistol, and smallbore rifle. Katherine has competed numerous times at 4-H State competitions and at the Daisy National BB Gun Championship Match. Additionally, she has competed at the National PPP Championship, Virginia Junior Olympic Shooting Championships, and National Junior Olympic Shooting Championships. Katherine is excited to have the opportunity to compete with Liberty University's Rifle Team and to represent Liberty through the shooting sports.