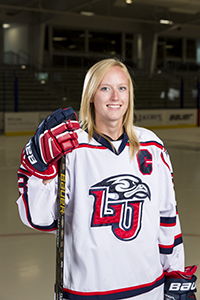 Carrie Jickling is entering her 4th year with Liberty D1 Women’s Hockey. She was named an assistant captain her sophomore year and this is her second year being team captain. She was apart of the national championship winning team last year and was named a 1st Team All-American. She was also named the Off-Ice MVP for the ACHA last season. After her time here at Liberty is done she plans on returning to Alberta, Canada to hopefully continue playing some level of competitive hockey while pursuing a career in Human Resources.