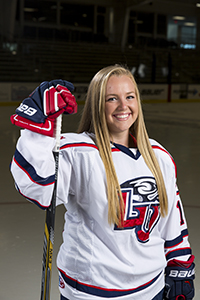 Chelsey Greenwood was born in 1996 in Brampton, Ontario. She has been playing hockey for 15 years. She helped her team win the National Championship title in the 2014-2015 season with Liberty University scoring the 4th goal in the final game. In high school, she was named 2012 Lacrosse MVP, 2011 High School Hockey MVP, 2011 High School Softball MVP. She hopes to pursue her dream of becoming a high school gym teacher with the possibility of playing some level of hockey.