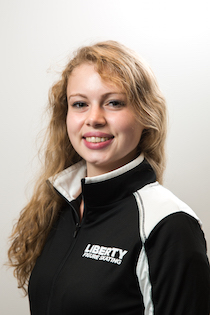 Rebekah began skating in 2010 in East Asia, where she grew up. Her mom has always loved skating when she was younger and offered the opportunity to learn how to skate at the local rink with local coaches. Both daughters initially declined the offer for fear or falling, but after watching the 2010 Winter Olympics and falling when skateboarding a few times, they both agreed to try figure skating. She has passed her pre-juvenile freeskate and moves tests. Rebekah grew up overseas and only just moved to the States to go to Liberty her freshman year. Fun fact: she's been in four and a half different countries in the time span of 48 hours and thinks in Mandarin much of the time, especially when skating.