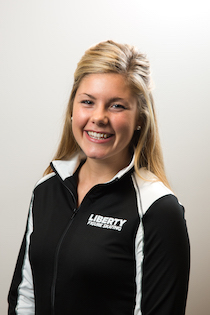 Avery began skating when she was eight years old at the newly opened LaHaye Ice Center back in 2007. She competed for 5 years as a member of ISI and performed with the local theater on ice team during that time as well. She also participated in seasonal ice shows throughout her younger years of skating. At age 13 she transitioned into mixed martial arts (MMA) and trained at the Renaissance Academy of Martial Arts for three years. She received her black belt in Muay Thai in June of 2015. Now as a junior at Liberty pursuing her degree in Biblical Studies with a minor in education, the Lord provided the opportunity for her to return to figure skating through Liberty's team. She plans on getting her masters degree in education as well so that she can become a teacher.