Flames turn up the heat, stay unbeaten against Mountaineers 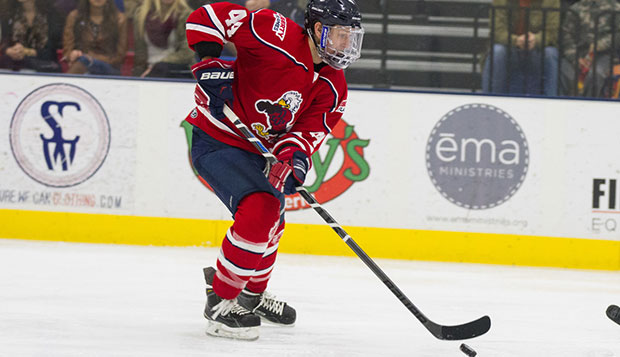 "Simon helps us out offensively, especially," Liberty senior defenseman Cam Bakker said. "He just has a knack around the net for putting the puck in. It's good to have him back. Logan coming back, too, to add some size, really helps out that line. They can develop a bit of a presence out there and we saw that tonight. It was a bit of a physical game and they excelled on it."

The College For A Weekend crowd got more than their money's worth in the way of hard checks and electrifying goals. Liberty pulled out its red Sparky jerseys in honor of Valentine's Day weekend and stuffed animals went flying onto the ice when the Flames got on the scoreboard midway through the first period in support of Gleaning for the World's Teddy Bear Brigade.

Senior forward Ryley Egan broke the scoring ice and triggered the Teddy Bear parade when he received a backdoor pass from sophomore forward Robert Ward, skated in along the bottom of the left circle and lifted a backhanded wrist shot top shelf past Mountaineers goalie Eric Schaetzle with 11:44 left in the opening stanza.

"Ward's got incredible vision and hands and helps us out and Egan's always there to bury a few for us," Bakker said.

"They're not offensively powerful, but they're a hard-working team, so you've got to be ready for whatever they throw at you," Bakker said. "If you get complacent when you play them, they can beat you. They gave us a tough test tonight, so we're going to have to show up even more ready (Saturday)."

Three minutes into the second period, Liberty junior forward Bram Erickson started a fast-break opportunity with an outlet to Logan, who skated past his man on the left wing and cut back inside the left circle before feeding the puck in front to Erickson, who crashed the net and finished with his right skate into the upper netting for a 2-0 cushion.

"I was cutting wide there and then I saw Erickson streaking in so I was able to hit him and he made a great play to put it in," Logan said. "Our line had a real good night. We were aggressive, all over the puck."

Finally, in the third, with the Flames on the power play, senior forward Lindsay LeBlanc distributed the puck out of the left corner through to Simon, who one-touched a backhand assist across the goal mouth to Bakker for a one-time finish from deep in the right circle.

"We've been working on that play all year and it finally worked out," Bakker said. "It felt good to finally bury it and give us some insurance there."

Moments later, LeBlanc would come to Bakker's defense after he was checked down by WVU forward Colby Harrison while trying to jam the puck past Schaetzle near the right post.

"Me and Lebs have that kind of brotherhood going where we always have each other's back," Bakker said. "He's the heart and soul of the team and he does it every night. He's a playmaker. He plays all over the ice. Whatever you need, Lebs is there to do it. It's good to have him."

Liberty improved to 11-0 against the Mountaineers over the past three seasons, since West Virginia moved up to the DI level. The Flames will seek to complete their first sweep of an ACHA opponent at home this season in Saturday night's rematch, starting at 7 p.m.

"We haven't had too many of those this season, but we're going to be working hard for it (Saturday) especially with it being our last game before the final rankings come out next week," Bakker said.

The Flames are ranked No. 13 in this week's ACHA DI poll, and would like to move up into the top 12 to have a chance of receiving a first-round bye in the National Championships. They will have freshman forward Luke Hannon — the league's top scorer who distributed three assists for Team USA in Friday's final game in the World University Games, an 8-3 victory over Korea — back in action for next weekend's games against No. 3-ranked Minot State.

"We matched up well and it will be exciting (Saturday) too," Logan said. "We've got Minot next week and then we will be off to nationals, so it's big to string some wins together and go to nationals hot. We'll get Hannon back and with a full lineup, we'll be a scary team."