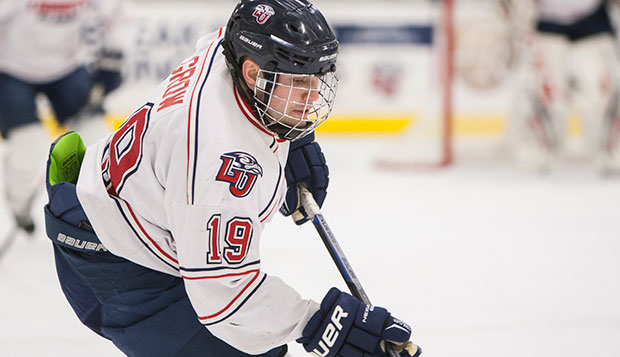 Liberty senior forward Caleb Grow scored the game's first goal midway through the second period against Maryland, which had eliminated the Flames from the Southeast Regionals in 2013.

"It was a really good game," Flames Head Coach Chris Lowes said. "We dominated the first period. We outshot them 10-1 but couldn't buy a goal. We needed to crash the net a little better."

Liberty outshot the Terrapins, 35-13, for the game and many of Maryland's shots coming early in the second period with the game still in a scoreless tie.

"They came out on fire in the second period," Lowes said. "I don't know what their coaches said, but they were buzzing. They had survived the first period when we had the sustained pressure, and then came out in the second and had a five-minute cluster when (senior goalie) Blair (Bennett) made some really big saves."

After weathering Maryland's initial burst in the second period, senior forward Caleb Grow netted the game's first goal for the Flames on a power play, cleaning up a rebound off shots by sophomore Devon Docksteader and junior Paul Ingles with eight minutes remaining.

Clinging to a 1-0 advantage with two and a half minutes remaining in regulation, Liberty freshman forward Tim Bierema added an insurance goal with a one-on-one wrist shot off an assist from sophomore Kaleb Shannon. The Flames went on another power play, but Maryland pulled its goalie nonetheless and junior forward Peter Kazmierczak, who was named player of the game, iced the victory with an empty netter off an assist from Ryan Bray in the closing minute, his third goal in the last two games.

"We're happy with the win and hope we got a little momentum because we know we're going to have to play even better tomorrow," Lowes said.

The Flames (16-9-1) will face Delaware, a 4-3 overtime winner over Virginia Tech, starting at 5 p.m. Liberty split two games with the Blue Hens this season after eliminating them in the first round of last season's MACH playoffs.