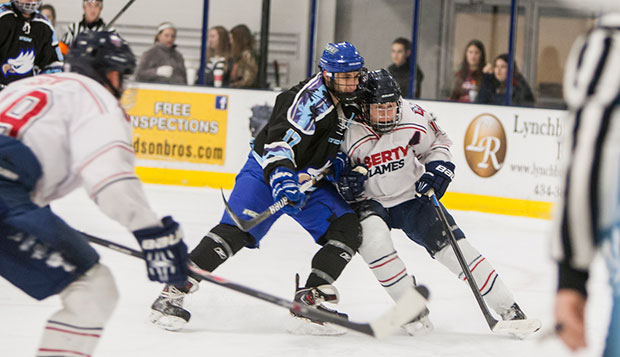 For the season, Ingles leads the Flames and ranks 13th in ACHA DII in scoring with 61 points (29 goals, 32 assists) while being penalized just once, spending a total of two minutes in the box.

"We've had guys before who were very disciplined, but the fact that Paul's a centerman and has so much responsibility on the defensive end and he's only drawn one minor penalty all season is pretty amazing," Liberty Head Coach Chris Lowes said

Ingles has started the majority of this season's games beside the Flames' second- and third-leading scorers, sophomores Devin Docksteader (26G, 24A) and Ben Freymond (11G, 21A), while essentially serving as the team's third defenseman on the ice.

"Being our leading scorer as a centerman says a lot," Lowes said. "He plays on good line and they've shown a lot of chemistry. He creates a lot of chances. Offensively, it's been a big breakthrough year for him. He took on the challenge to refine his game and work on his finishing touch in the offseason and his energy and physicality make him very valuable."

Ingles doesn't back down from many challenges, but remains disciplined enough not to commit penalties or start altercations on the ice.

"He doesn't lose many battles or pucks," Lowes said, noting his few fouls are "not due to a lack of intensity or effort. He's effective in winning those battles without any unnecessary stickwork or roughness. He's been able to take the abuse and play a physical game without drawing the refs' attention."

Liberty (15-9-1), seeded No. 1 in the South Divisions, opens play in the Mid-Atlantic Collegiate Hockey Association playoffs today at 4:15 p.m. against fourth-seeded Maryland (8-11-2) at Ice World in Abingdon, Md.

As the 10th seed in the 2013 Southeast Region playoffs, the Terrapins advanced to the ACHA DII National Championships after upsetting third-seeded UMBC in the opener and the fourth-seeded Flames in the second round.

If Liberty can beat Maryland for the third time this season, it would face the winner between Delaware and Virginia Tech — a team the Flames have already defeated three times — in Saturday's South Division final at 5 p.m. The winner of that game would play the North Division winner, Sunday at 2 p.m. Penn State is the top-seeded team in the North, which also includes Rowan, Temple, and Rider.

"It should be a real exciting tournament," Lowes said. "It's very competitive. There are no easy matchups. With the excitement of single-game elimination, anything can happen. We're going to have to be at our best, play disciplined hockey, and avoid mistakes."

The Flames definitely have the offensive firepower needed to win the tournament, with sophomore Ryan Bray, junior Peter Kazmierczak, and senior Caleb Grow on the second line and freshman Tim Bierema, sophomore Jordan Barstead, and senior captain Johnny Cotton on the third. Their defense is anchored by sophomore Daniel Huntington and backed up by senior goalie Blair Bennett.

Liberty, which defended its South Division regular-season title this season, lost to eventual champion Delaware in the second round of last year's tournament.

"It'd be nice to be able to get the sweep this year," Lowes said.