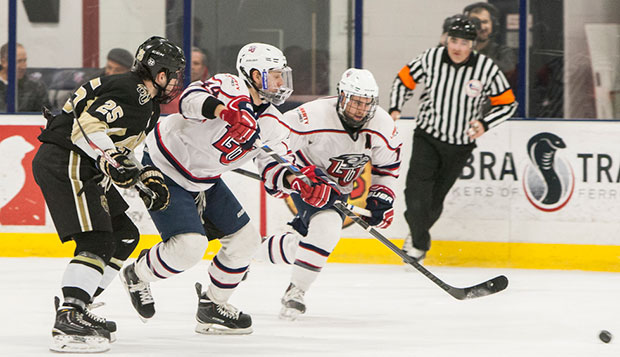 When Liberty University's ACHA Division I men's hockey team faced West Virginia over Halloween weekend in Morgantown, W.Va., 20 games ago, the Flames improved to 10-0 over the past three seasons against the Mountaineers by stringing together their only four-game winning streak of the season.

Now, with four regular-season games left on the schedule, Liberty, ranked No. 13 in last week's poll, is looking to start another streak to help secure a spot in and gain some momentum for its eighth ACHA DI National Championships appearance in nine seasons in the league.

Fans are encouraged to bring a new or gently loved stuffed animal to the rink to participate in the annual Teddy Bear Toss, throwing it out on the ice after the Flames' first goal. The animals collected will be given to Gleaning for the World for its Teddy Bear Brigade.

Liberty Scouting Report: The Flames got a career game out of senior forward Ryley Egan last Friday night, when he scored four goals and assisted a fifth in his club record 145th game as Liberty rallied from two first-period deficits to defeat Oakland, 7-3.

He now ranks third on the team in scoring with 21 goals and 19 assists on the season, behind senior forward Lindsay LeBlanc, who has scored 16 goals and distributed an league-leading 44 assists. Two defenseman — freshman Ben Hughes (8G, 28A) and senior Cam Bakker (9G, 22A) rank fifth and sixth, respectively, in scoring.

Liberty will be without ACHA DI leading scorer Luke Hannon (32G, 34A), who is competing for Team USA in the World University Games, contributing a goal in Saturday's 3-2 overtime win over Kazakhstan and an assist in Tuesday's 4-1 victory over Sweden.

West Virginia Scouting Report: As No. 23 Oakland did last weekend by splitting the series with Liberty at LaHaye, unranked West Virginia— which had won four in a row before last weekend — will try to play the role of spoiler and pull off its first-ever win against the Flames.

WVU advanced to the ACHA DI playoffs last year by winning the College Hockey Mid-America conference title. But the Mountaineers slipped to 10-4 in CHMA play and out of a second-place tie with Mercyhurst (11-3) in the conference standings with last Saturday's 6-3 loss to the Lakers. The night before, WVU suffered a 5-3 setback to first-place Robert Morris (Pa., 13-0-1).

Nine Mountaineers seniors will play their last regular-season games this weekend in Lynchburg before traveling to Pittsburgh for the CHMA playoffs, hosted by Robert Morris.

All-time series: Liberty is 10-0 against West Virginia, sweeping the teams' four meetings in each of the past two seasons and both games in Morgantown, W.Va., this past fall — 11-1 on Oct. 31 and 7-3 on Nov. 1. Last season, WVU had its season ended by Navy in the first round of nationals, the day before the Midshipmen eliminated the Flames.

Coaches: Kirk Handy is in his 15th season as the Flames' head coach, guiding them to an overall record of 329-139-19. Kyle Richards is in his first season at the helm of the Mountaineers.