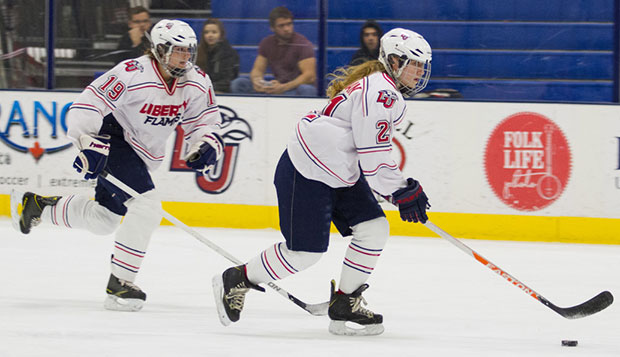 Senior defenseman Megan Shellman leads the attack in a home loss to Connecticut on Jan. 31 as senior forward Alëna Steiger trails on the play.

Liberty (4-11-1) was ranked No. 6 in the ACHA DII East Region, ahead of seventh-ranked Slippery Rock.

The Lady Flames, seeded fourth in the South Division, will face top-seeded Naval Academy on Friday at 5:55 p.m. before playing either the No. 1 or No. 4 seed from the North division, Saturday at 10 a.m.

"The girls are extremely excited to be in the playoffs as some of them have been working so hard to learn the game of hockey over the past two years," Liberty Head Coach Sara Niemi said.

Navy, playing its first season as an ACHA DI program, has gone 0-17 against DI teams, but 8-0 against its DII foes in DVCHC South Division play, defeating Liberty, Maryland, Virginia, and Slippery Rock twice each by a combined 74-25 margin.

Before hosting Connecticut and suffering back-to-back shutouts (8-0 on Jan. 31 and 6-0 on Feb. 1) in what turned out to be their final two home games, the Lady Flames traveled to New Jersey the weekend of Jan. 24-25 and played two of their most competitive games of the season at 10th-ranked Rowan. Down to 12 players and utilizing only two offensive lines, Liberty lost by 3-1 and 3-2 scores.

"It was a very even game and we kept Rowan on its toes throughout, but the bounces weren't going our way," Niemi said, noting Liberty had a goal by senior defenseman Megan Shellman called back in the first period and junior forward Alëna Steiger narrowly missed an open-net opportunity in the opening minute.

In the rematch, Niemi restructured some of her lines, moving junior defenseman Meghan Nawyn and Shellman up on attack. The Lady Flames responded by seizing an early 2-0 lead on a goal by Davis assisted by Shellman and Gerber seven minutes after the opening faceoff before Shellman finished off an assist from Holman six minutes later.

Rowan cut the deficit in half midway through the second period and trailed 2-1 going into the third, when it scored two goals on one five-minute power play to overtake the lead.

Niemi pulled sophomore goalie Emily Thomas (24 saves) with two minutes left in regulation but couldn't net the equalizer despite outshooting the Profs 28-27 for the contest.

"Again, it was a very back-and-forth game," Niemi said. "Everyone played hard and confident, but the one penalty hurt us in the end."