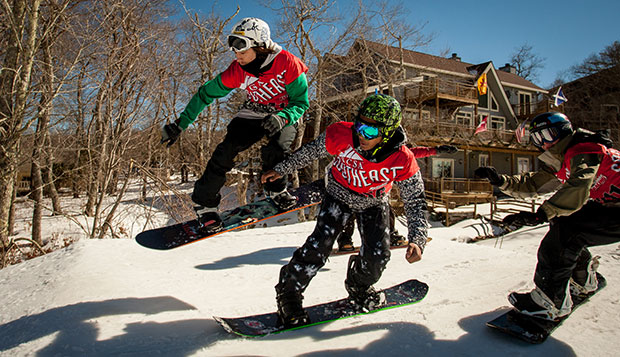 Four members of Liberty University's men's snowboard team placed in the top eight out of close to 70 competitors in Sunday's second boardercross race of the season, held in slushy conditions at Beech Mountain (N.C.) Resort.

For the Lady Flames, senior Brooke Gibson got disqualified in her first run after going around a gate the wrong way and junior Brandi Fronte was eliminated in the second round.

"It was about 60 degrees (Sunday) which created unfavorable conditions and resulted in slow times," said Liberty Head Coach Ryan Leeds, who noted the course went through the terrain park with the gates set up around the slopes' features. "Either way, I was happy to have four guys in the top eight. It was a good opportunity for them to race. In the Southeast Region, boardercross is pretty popular."

Though it is considered a freestyle event, boardercross is more similar to a downhill slalom race, not normally a strength of the Flames who train predominantly on Liberty Mountain Snowflex Centre's slopestyle features.

"For most of the guys, this is their first time doing it, and the people who are excelling are surprising themselves," Leeds said, noting assistant coach Dave Promnitz, an experienced boardercross racer, has given them plenty of tips. "They're really good park riders and have the basics of snowboarding down pat. It comes down to fundamental snowboarding, knowing how to use your edges and where your body is supposed to be. When you know how to do it, everything else just clicks."

It has yet to be determined if boardercross will be offered at the United States Collegiate Ski and Snowboard Association Southeast Regional championships, set for Feb. 19-21 at Wintergreen Resort. But it will definitely be an event Liberty hopes to excel in at the 37th-annual USCSA National Championships, March 1-7 at Mt. Bachelor in Bend, Ore.

Slopestyle and boardercross competitions are scheduled at nationals, though Leeds is not sure if there will be Big Air or Rail Jam events.

"Nationals is a big stage where we'll be riding against a lot better talent, on a much bigger course, and against a much larger field of riders. Instead of 60 people in a competition, there may be 150 or 200 people, so it gets a lot more intimidating and more difficult to be able to do well in an event of that magnitude," he said "We're more of a freestyle-oriented team, so the more freestyle events, the better."

The Flames, who will fly out to Oregon on Feb. 28 to have time to get acquainted with Mt. Batchelor's terrain park, placed second in last year's USCSA Rail Jam held at Lake Placid, N.Y.

This Saturday, several team members will compete for prizes with riders from other schools and a few high school students in the LaHaye Rail Jam, held in conjunction with College For A Weekend. The short slope behind the LaHaye Ice Center will include two rail features and one box feature.

Qualifying rounds will start at 1 p.m. with finals to follow immediately after and the competition likely to end by 4 p.m.