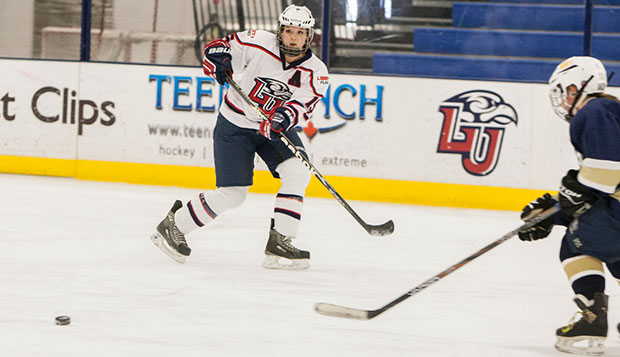 Liberty senior defenseman Autumn Kucharczyk eyes the puck beside a Navy player during the Lady Flames' 17-0, 16-0 weekend sweep at the LaHaye Ice Center.

The morning after a 17-0 score-a-thon in Saturday's opener against the Naval Academy, Liberty University's ACHA Division I women's hockey team showed little mercy to the Midshipwomen (2-17) in the rematch, outgunning their guests 76-21 in a 16-0 blowout Sunday at the LaHaye Ice Center.

Jickling also contributed two assists and senior forward Sarah Stevenson (14G, 28A) tallied three goals and three assists for Liberty (22-4-1, ranked No. 2 in ACHA DI) as both moved into the top five among the league's scoring leaders.

Senior defenseman Madison Fischer dished out four assists, including setting up three of the first four goals in the opening period, when Liberty seized a 7-0 lead. Freshman forward C.J. Tipping added two goals and an assist, senior forward Jenny MacArthur contributed a goal and three assists, junior forward Brittany Hymers tallied a goal and an assist, and graduate forward Nikki McCombe added a goal to round out the scoring.

Junior goalie Kristina Toppazzini made 21 saves to become the third Lady Flames goalie to post a shutout against Navy this season.

Stevenson said the Lady Flames used the two contests to fine-tune their offense in game situations, as they plan to do in next weekend's series at Buffalo, an ACHA DII program.

"We're just trying to work systems and pass a lot to get ready for the harder teams we're going to play," she said. "These teams are easy to take advantage of, but it's really good practice for us. We definitely hope to bring speed and skill to that team and do the same thing, just like work together, roll all three lines and get some good goals to get momentum for nationals."

Liberty, which has eight seniors and one graduate student, is preparing to make a third consecutive run to the ACHA DI Final Four, March 4-8 in York, Pa.

"We're playing the weaker teams now, but we're going to come up against some really fast teams," Stevenson said. "Everyone's working hard in the gym and in practice, just trying to look at that ultimate goal of nationals because we need to be as fit as we can. That's why we can't take these games lightly. We have to come out to them like they're No. 1 teams."

The veterans realize this is their last chance at a national championship after finishing second and third the past two seasons.

"There's a lot of chemistry with us seniors and a lot of us are used to playing with each other, so it's definitely going to help us in the end," Stevenson said. "Teams know about us, that we have a big senior class, so we just need to use our chemistry, our speed, and our versatility to really bring it at nationals."