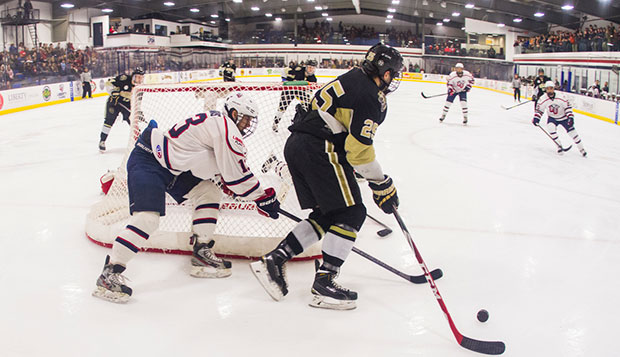 Struggles executing on the power play and a freshman goalie with a hot hand prevented Liberty University's ACHA Division I men's hockey team from completing its first home sweep of an ACHA opponent this season, as Oakland salvaged a split with a 5-2 upset, Saturday night at the LaHaye Ice Center.

With the Golden Grizzlies on a power play, Oakland forward Andrew Parus scored the only goal of the first period unassisted on a counterattack after picking up a loose puck in the defensive zone. He skated up ice, cut over to the left side after crossing the Flames' blue line and fired a wrist shot from the top of the left circle into the upper netting past Liberty freshman goalie Josh Halpenny, who was screened on the shot with 6:48 left in the period.

The Flames missed several close chances on three first-period power plays and let a five-minute man advantage slip away without a score in the second period. Liberty outshot Oakland 38-29 for the game, but freshman goalie Sean Parker made 36 saves to stifle the Flames' attack.

"It wasn't going tonight like it was last night," Flamed head coach Kirk Handy said. "The power play was a bit of a foreshadowing of our game tonight. It was there, but it wasn't quite there. We weren't able to capitalize on the five-minute power play. We had the momentum going our way, we had some good opportunities, but their goalie made some good saves, too."

Liberty netted the tying goal with 12:44 left in the second period on a play that started and ended off the stick of sophomore forward Robert Ward. He won a faceoff in the defensive end and sent a cross-ice outlet to senior forward Ryley Egan along the left boards. Egan returned the puck to Ward, who had streaked past the Golden Grizzlies' defense for a one-on-one finish, beating Parker top shelf.

But after killing Liberty's extended power play, the Golden Grizzlies reclaimed the lead at the second-period buzzer when forward Doug Andrews bumped Flames defenseman Steven Bellew off the puck in the left circle and Donovan Bewick fired a shot into the upper left corner of the cage.

As he had on his fourth goal in Friday night's 8-3 victory, Egan, stationed in the left crease, tipped in a shot from the high slot by freshman defenseman Ben Hughes, this time deflecting a low puck into the upper netting to retie the game for the Flames less than a minute and a half into the third period.

However, Oakland regained the lead less than a minute later when Ryan Rotondi received a through pass from Patrick Smiatacz and threaded a wrist shot from in the left circle over the glove of Halpenny.

Smiatacz gave the Golden Grizzlies their first two-goal lead of the two-game series with 12:15 remaining in regulation when he one-timed an assist from Frank Saputo, who gathered the puck behind the net and drifted out from behind the right post before sending a cross-crease pass off Halpenny's stick.

Then, with 9:40 to go, Matt Stirling padded Oakland's advantage to three goals by gathering a loose puck in the left circle, skating in and sneaking a wrist shot into the right side of the net.

Both teams were playing without their top scorers, who are competing in the World University Games in Spain — Liberty freshman Luke Hannon, the ACHA DI scoring leader (32 goals, 34 assists) who netted Team USA's first goal in a 3-2 shootout victory over Kazakhstan in Saturday's second round, and Oakland senior Billy Balent (22G, 20A).

Liberty returns to the LaHaye Ice Center next Friday and Saturday night against West Virginia, a team it swept Nov. 1 in Morgantown.

"Next week is the last weekend before the final rankings come out, so we're going to have to play well and get it done," Handy said. "The time is short. We've only have a couple weeks to push on. We're going to refine as a team. We have to use this and turn a negative situation into a positive and we're going to do that and make sure that we come back next week ready to go."

The coaching staff met with the Flames for an extended post-game debriefing in the locker room.

"We just got the guys together to let those guys know that we believe in them," Handy said. "We believe in what we're doing. We're going to make sure that we regroup and are ready to go next week. I would see us as a team that's going to be there at the end."