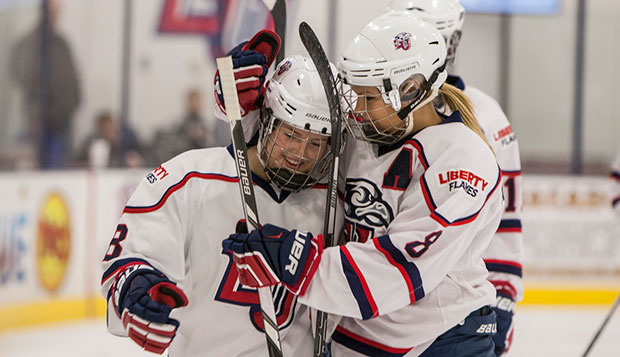 Liberty University's ACHA Division I women's hockey team gave a 17-goal salute to its eight graduating seniors in Saturday's game against the Naval Academy, played on Senior Day at the LaHaye Ice Center.

Liberty (20-4-1, ranked second in the third of four ACHA DI polls), was relentless on attack, bombarding Navy goalie Sarah Hutchinson with 80 shots while Lady Flames senior goalie Chantal Lischynski only had to make 10 saves to preserve her fourth shutout of the season.

Senior forward Amanda Grainger, who came in with 10 goals and 10 assists on the season, added five goals to her total and received the game puck.

"We're coming down to the finals and everybody's basically healthy and we are reminding the girls that you've got to play like you're going to nationals," Lady Flames Head Coach Paul Bloomfield said. "We don't want to run the score up but at the same time, you don't want to lay down, either. We just told the girls to work on their cycling and setting each other up and they really kept good focus."

The Midshipwomen are now 2-16 with their only two victories coming in season-opening 9-0 wins over Liberty's DII team.

Bloomfield was impressed with the team's mental approach to the game, using it as preparation for nationals.

"I think the girls are ready," Bloomfield said. "They mentally want to do this. They're communicating well on the ice and the girls are working hard."

"It's a big graduating class this year, so I guess we better have a big recruiting class, too," Bloomfield said.

Sunday's rematch with Navy is set for 10 a.m. at LaHaye.