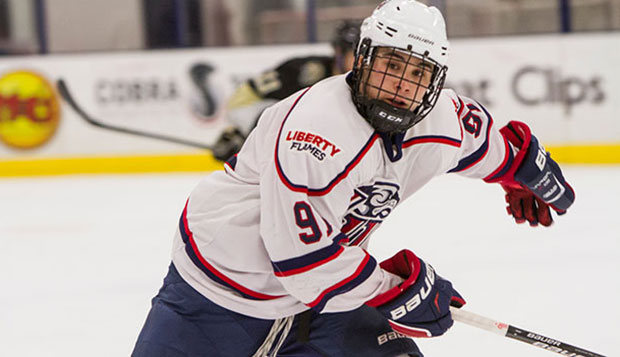 Playing in his club record 145th game with the Flames, senior forward Ryley Egan turned in the game of his career for Liberty University's ACHA Division I men's hockey team, Friday night at the LaHaye Ice Center.

Egan broke in a new stick by netting the first hat trick of his four-year career with the Flames, scoring four times and distributing an assist to lift 13th-ranked Liberty to an 8-3 victory over No. 23 Oakland (Mich.). It was the first Friday night home win for the Flames since an 8-0 rout of Arizona on Oct. 3.

"Egan's been consistent and pretty durable throughout his career so he's been able to play a lot of hockey for us," Liberty Head Coach Kirk Handy said. "It was nice to see, on such a special night for him, being the all-time Flames' leader in games played, that he was able to have such a huge night for us with five points. He just put himself in good positions to score."

Coming off a two-game sweep at Delaware, when he was held to one goal in two games, Egan gave Liberty's offense a much-needed spark.

"I've never had more than a two-goal game, so it was just nice to finally get that hat trick," Egan said. "We've been on a little bit of a roll lately and we're just trying to build off of it every game and just keep the momentum going and bring it into the (March 5-9 ACHA DI National Championships)."

"Ryley played unreal tonight," added sophomore goalie Matt Pinel, who made 31 saves to improve to 6-0-3 on the season.

Egan scored two goals in the first period as Liberty battled back to tie the Golden Grizzlies twice.

Oakland seized an early 1-0 lead when defenseman Ian Jacobs made a steal on the right side near the Flames' blue line and skated in before sending a crossing pass to forward Donovan Bewick, who redirected the puck past Pinel through the five hole from point-blank range.

Three minutes later, Egan received a cross-ice pass from fellow Flames senior forward Bram Erickson on a fast break, skated across the left side of the blue line and unleashed a slap shot that glanced off the glove of Oakland goalie Corey Hrischuk into the back of the net, evening the score at 1-1.

Liberty nearly took the lead when senior forward Ryan Kerr made a breakaway steal and crossed the puck for freshman forward Colt Steele, but his redirected shot from near the right post veered wide left as a defender back-checked him into the boards.

The Golden Grizzlies went up 2-1 when Doug Andrews took Bewick's pass from behind the cage and squeezed his shot from the left crease under the blocker of Pinel with 9:41 left in the opening period.

The Flames killed a penalty called against freshman forward Paul Lamoureux and Pinel made spectacular back-to-back lunging saves of a backhanded shot by Michael Mackinnon and a rebound from the left side by William Kocher at the 4:00 mark.

Moments later, after Lamoureux was tripped up in the right crease, sending Oakland defenseman Corsone Johnstone to the penalty box, Egan netted his second goal when he gathered the rebound of sophomore forward Robert Ward's shot from the top of the left circle and slammed home the equalizer inside the right post with 3:22 left.

"Our power play and penalty kill were the difference for us tonight," Handy said. "Both were working pretty well. We scored three power play goals. I thought the turning point of the game for us was when we killed that five-on-three (early in the second). We came back out and really established our game and it gave us some really good momentum moving forward."

Less than five minutes into the second period, Lamoureux capitalized on a fast-break opportunity to give the Flames their first lead. Sophomore defenseman Chase Harris skated the puck off Liberty's endline to the blue line and sent Lamoureux a pass near center ice. From there, he accelerated around two Golden Grizzlies defensemen before cutting back and putting a move on Hrischuk, threading his shot through the five hole.

Liberty senior forward Lindsay LeBlanc, who had his backhanded putback blocked by Hrischuk late in the first period, extended the Flames' advantage to 4-2 with 4:47 left in the second when he controlled senior defenseman Cam Bakker's short pass from the red line to the blue line on the left side and lifted a wrist shot into the upper right corner of the cage.

Pinel blocked a shot by Andrew Parus at the second-period buzzer, preserving the Flames' two-goal lead.

Then in the opening five and a half minutes of the third, the Flames stretched the gap to four goals. Egan started an odd-man rush and Ward fed him a give-and-go pass in the right crease before caroming Egan's chip shot crossing pass off the left post and Hrischuk's right skate to make it 5-2.

Egan got his hat trick with 14:37 to go when LeBlanc launched a shot wide left of the goal that rebounded off the back boards to Bakker, who sent a backhanded assist from near the right post to Egan who finished with a backhander of his own.

Then, with the Flames on a power play, Egan deflected in a missile off the stick of freshman defenseman Ben Hughes from the point, swatting the puck past Hrischuk from deep in the left crease.

"I kind of just saw it coming in and I swung at it and got the stick on it and fortunately it went in," Egan said.

Oakland got one goal back on a power play of its own when Kyle Nelson backhanded the rebound of a shot by Parus in the left side of the goal mouth before Steele capped the scoring with a beautiful breakaway finish off a fast-break assist from junior forward Kyle Garcia, surging past a defenseman and deking around Hrischuk to deposit the puck in the right side of the cage.