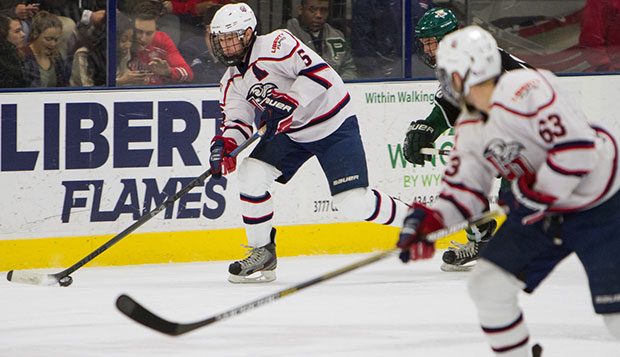 With senior forward Bram Erickson leading the way, Liberty freshman defenseman Ben Hughes skates the puck along the boards past an Ohio player, Jan. 23 at the LaHaye Ice Center.

Despite playing without two of its top three scorers, Liberty University's ACHA Division I men's hockey team unleashed one of its most explosive demonstrations of offensive firepower in the third period of last Saturday night's game at Delaware.

The Flames got goals from six different players in the contest — senior fourth-leading scorer Ryley Egan in the first period and freshman Paul Lamoureux, sophomores Chase Harris and Robert Ward, and juniors Kyle Garcia and Tyson Street in the third.

Liberty completed its first two-game series sweep in nearly three months, since Oct. 31-Nov. 1 at West Virginia, by rallying from a 3-1 deficit heading into the final 20 minutes for a 6-3 win on the Olympic ice at Fred Rust Arena, site of last year's ACHA DI National Championships.

This Friday and Saturday nights, Liberty will return to the LaHaye Ice Center for the first of three two-game home series to conclude the regular season, welcoming Oakland. The Flames will look to pull off their first home sweep in nearly five months since recording back-to-back shutouts of the Richmond Generals Junior "A" team on Sept. 12-13.

Liberty Scouting Report: While Luke Simon is sidelined by injury, fellow freshman forward Luke Hannon, the ACHA DI scoring leader, is now in Spain competing in the Feb. 4-14 World University Games, with Team USA facing Japan in Thursday's 2:30 p.m. opener. In their absence, the Flames have had the opportunity to experiment with their offensive lines, which Hannon's older brother, assistant coach Jake Hannon, did successfully heading into the third period last Saturday at Delaware.

Lamoureux joined forces with senior captain Lindsay LeBlanc — the second-leading scorer in ACHA DI with 15 goals and 43 assists — and sophomore forward Grant Garvin while Ward teamed up with Egan and junior forward Bram Erickson and both lines found instant chemistry.

Sophomore goalie Matt Pinel started both games at Delaware and improved to 5-0-3 with two shutouts in the cage, sporting a team-low 2.61 GAA and a team-high 92.0 save percentage. Other than in win percentage, freshman Josh Halpenny has very comparable stats (4-3, 2.65 GAA, 91.1 SP).

Oakland Scouting Report: The Golden Grizzlies, who split their home-and-away series with Michigan foe Rochester last weekend and have now lost four of their past six games, still managed to move back into the ACHA DI top-25 poll this week, for the first time since being swept at rival Davenport on Jan. 16-17.

All-time Series: The Flames are 15-12-2 against Oakland after sweeping all four games with the Golden Grizzlies last season. Oakland defeated Liberty in the 2006 ACHA DII national championship game, in both teams' last season competing at that level.

Coaches: Kirk Handy, in his 15th season as Liberty's head coach, has an overall record of 328-138-19. Oakland second-year Head Coach Gordie Schaeffler, who is in his 10th season with the program after previously serving as an assistant, is now 40-34-1.