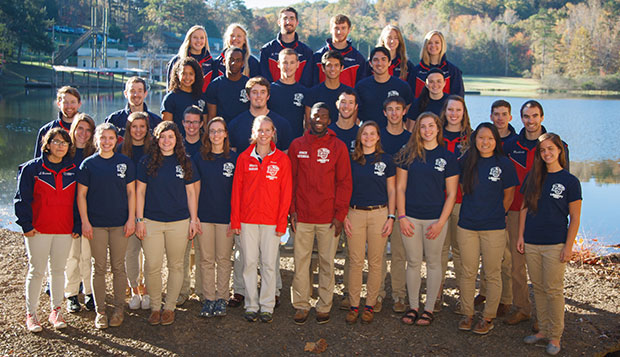 She was one of 16 members of Liberty's men's and women's crew teams who demonstrated their power and endurance and put their stroke technique to the test on indoor rowing machines set up in the gym of T.C. Williams High School, where thousands of collegiate, high school, and adult rowers competed.

"This was a great opportunity to measure up individually with other rowers from local schools in Virginia," Liberty Head Coach Sarah Morris said, noting Georgetown, from Washington, D.C., was the top team in the competition. "It was a 2,000-meter race on the ergometer indoors, so it was fun to watch everyone racing up close."

In the freshmen men's category, Tyler Seelig rowed a personal record time of 7 minutes, 19.3 seconds for the Flames.

"Tyler Seelig did a phenomenal job this weekend," Morris said. "He has really stepped up and is pushing himself to the next level."

Liberty's next indoor test is the Colonial Erg Sprints, hosted by the College of William & Mary, Feb. 28 in Williamsburg, Va.