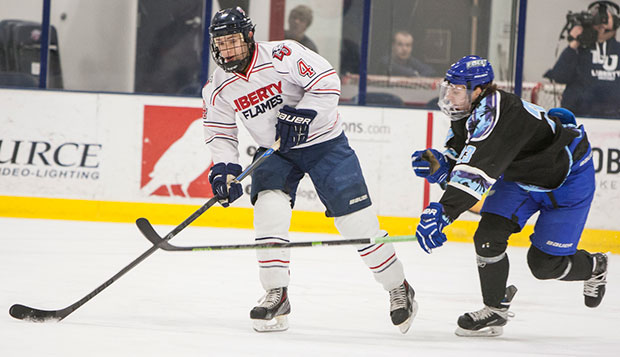 Facing an undefeated Florida Gulf Coast team for the fifth time this season, Liberty University's ACHA Division II men's hockey team gave the Eagles (25-0) their best shot and continued to close the gap on the top-ranked team in the Southeast Region, Saturday afternoon in a 4-2 regular-season-ending setback at the LaHaye Ice Center.

The Flames (21-10) seized a 2-1 lead, their third in the five-game series, with 7:38 left in the second period when freshman forward Tim Bierema followed sophomore forward Kaleb Shannon's shot from the right wing by pocketing his second goal of the game from a tough angle in the left crease.

"Timmy showed up big," sophomore forward Ryan Bray said of Bierema, who recently returned from an injury that opened the door for Bray to start in his place on the top line. "He had two chances there and he buried both of them, so he had a great game. It looks like he hasn't really missed a stride. He's come back strong."

However, five and a half minutes later, the Flames allowed FGCU forward Dillon Duprey, the Eagles' leading scorer (27 goals, 29 assists) to go on a breakaway up the left side of the ice. He capitalized on the one-on-one with Liberty senior goalie Blair Bennett, deking to the right and depositing the puck between Bennett's left pad and the right post to knot the game at 2-2.

Then, just 23 seconds before the end of the second period, the Eagles swooped in on the Flames' cage again, this time executing a three-on-one with forward Nick Schilson sending a cross-crease pass to Duprey, who one-timed the puck into the right side of the net for a 3-2 lead.

"Those are tough to take there," Bray said. "With less than a minute left, you really don't want to give up a goal. They're a good team when you give them odd-man rushes. If we had eliminated the odd-man rushes, their breakaways, three-on-ones, two-on-ones, we're winning those games. Just mental lapses on offense and defense cost us."

Duprey had his hat trick revoked when Bennett dislodged the goal with his skate a split second before he scored on a wraparound from the left side with 7:20 left in the third period. But Jordan Klotz answered 20 seconds later, lifting a wrist shot into the top right corner of the cage after making a quick counterattack through the right circle to give FGCU a two-goal advantage.

Liberty is now in postseason mode as it will try to return to the DII National Tournament, starting March 20 in Salt Lake City, Utah, by winning its two Southeast Region tournament games. First, the Flames will seek to defend their Mid-Atlantic Conference Hockey Association (MACHA) tournament title, facing Maryland in the first round on Feb. 13 before a potential Valentine's Day South Division final matchup with Virginia Tech.