Lady Flames tame Lady Lynx, but only come away with a split 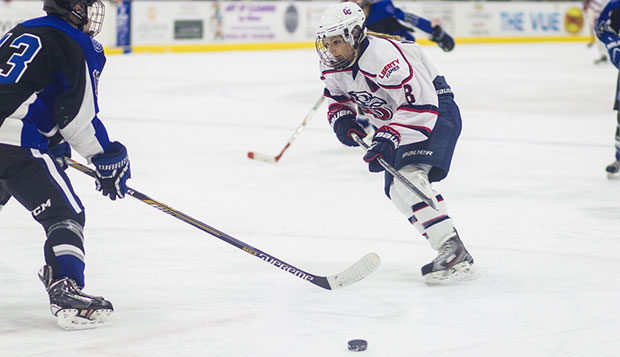 Lady Flames senior forward Jenny MacArthur maneuvers the puck around a defender in a recent game at the LaHaye Ice Center.

In Saturday morning's rematch, Liberty University's ACHA Division I women's hockey team dealt Lindenwood of Belleville (Ill.) its first home defeat at the Ice Zone in Hazelwood, Mo., the official practice facility of the St. Louis Blues. The Lady Flames (20-4-1, ranked second in the third of four ACHA DI polls) outshot their hosts by a 56-22 count and prevailed over the first-year program, 6-1.

The Lady Lynx (16-12-1), who compete in the Western Women's Collegiate Hockey League along with fellow ACHA DI members Colorado, Colorado State, Denver, Midland, Minnesota, and Wisconsin, were 8-0-1 on their home ice after upsetting Liberty 2-1 on Friday night.

"Last night's loss was a tough one, especially for a team of this caliber," Lady Flames Head Coach Paul Bloomfield said. "I reminded everybody what we're here for and they did what they needed to do and I felt they rebounded well."

Even in defeat, Liberty outshot Lindenwood by a 45-11 margin in Friday's opener, but Lady Linx goalie Firth Bidois made 44 saves.

"We pounded them all night but we just couldn't get it in the back of the net," Bloomfield said. "Sixty percent of the time, we totally dominated them, but their goalie was phenomenal."

Junior forward Carrie Jickling scored Liberty's lone goal, assisted by senior forwards Sarah Stevenson and Jenny MacArthur, just over five minutes after the opening faceoff. With senior defenseman Madi Fischer in the penalty box, Lindenwood struck back to tie the contest on a power-play goal by freshman forward Alahna Stivers-Myers, assisted by Cailee LaPorte with 6:15 left in the first period.

"I was impressed with their team, considering it's a first-year program," Bloomfield said. "They're not a really talented team, but they played better than us at times last night. "

With just over five minutes remaining in regulation, Lady Lynx junior forward Jaylene Anderson netted the game-winner from out in front off an assist from behind the cage by freshman forward Ashley Dietmeier.

"Our penalty kill broke down on the first goal and the other was a weird fluke from behind the net," Bloomfield said. "(Dietmeier) passed it in front and (Liberty senior goalie) Sam (Rupp) stopped it and lifted her hand and the puck trickled in."

The difference between the Lady Flames' showing in Friday night's opener and Saturday morning's rematch was like night and day.

Lady Lynx right wing Reagan Fuller put her team on top, beating Liberty senior goalie Chantal Lischynski with 13:41 left in the first period. But Jickling, who was awarded the game puck by her teammates, scored the tying and go-ahead goals in the final five minutes of the stanza, finishing assists from Fischer with 4:30 left and Autumn Kucharczyk with 2:27 to go.

In the second period, MacArthur stretched the lead to 3-1 with 8:23 to play off assists from Fischer and Kucharczyk before freshman forward C.J. Tipping finished feeds from Stevenson and junior forward Sarah Fowler with 2:48 remaining.

Kucharczyk padded the lead to 5-1 with 13:55 left in the third off an assist from Stevenson before Fischer capped the scoring with 4:36 to go by putting away passes from freshman forward Chelsey Greenwood and graduate student Nikki McCombe.

The Lady Flames outshot Lindenwood 56-22, but Bidois kept the game from being a blowout by making 50 saves.

"There were times when a minute would go by and their girls wouldn't even have a chance to touch the puck," Bloomfield said. "It's a wonder it wasn't 50-0. Their goalie was absolutely amazing."

Liberty hosts two games against Navy next weekend before concluding its regular season with a trip to Buffalo. Both teams are in the process of dropping down to ACHA Division II.

Bloomfield expects the Lady Flames to maintain their No. 2 ranking in the final ACHA DI poll on Feb. 22. That would give them the best possible draw going into the ACHA National Championships in York, Pa., where they would hope to upset top-ranked, defending champion Miami of Ohio in the final to claim their first national title.