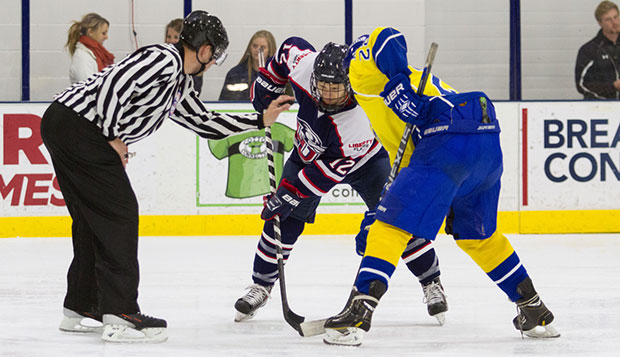 Flames senior forward Christian Garland takes a faceoff against a Delaware player in a game last semester at the LaHaye Ice Center.

Playing without freshman forwards Luke Hannon — the league's leading scorer who's in Chicago with Team USA preparing for the Feb. 4-14 World University Games in Spain — and third-leading scorer Luke Simon, who's sidelined by injury until mid-February, the 12th-ranked Flames (19-10-4) still found a way to pull out a critical win on the road over No. 17 Delaware.

"We did an excellent job tonight of doing what we needed to do in the defensive zone," Liberty Head Coach Kirk Handy said, noting defensemen sacrificed their bodies to block pucks in front of sophomore goalie Matt Pinel on a few occasions.

In a first period that featured only one penalty, Delaware (12-9-3) got on the scoreboard first with 2:52 left when left winger Michael Conte put away a short pass from forward Matthew Santucci with a left-handed forehand from out front that glanced off the glove of Liberty goalie Matt Pinel into the net.

But the Flames responded just over two minutes later when junior defenseman Steven Bellew caught the Blue Hens off guard and netted the qualizerby finishing a wraparound from the right post that beat Delaware goalie Dylan Troiano.

"That was a big building block to come back and score at the end of the first period tied 1-1," Handy said. "Steven Bellew had a really solid game for us. He played really well defensively and offensively, he scored a goal."

Just over three minutes into the second period, Liberty seized the lead by converting with nine seconds left on a power play. Freshman defenseman Ben Hughes launched a shot that sophomore forward Grant Garvin redirected out in front past Troiano, despite an interference penalty on the play that led to another man advantage for the Flames.

"It was a great shot by Ben Hughes and a great deflection by Garvin into the top left corner," Handy said, noting the Flames outshot the Blue Hens 10-3 in the second period and 40-20 for the game. "Pinel made a pretty big save early in the second period, before the power-play goal, which was pivotal."

In the third period, Liberty maintained the one-goal lead before adding a shorthanded insurance goal by senior forward Christian Garland from three-quarters ice into an empty net with 1:32 to play.

"Any time you can win the first one on the weekend, it's big," Handy said. "We need to regroup and come back ready to go, with the same effort (Saturday) night."

The rematch between the Flames and Blue Hens will again be streamed live from Fred Rust Arena, this time starting at 5 p.m.