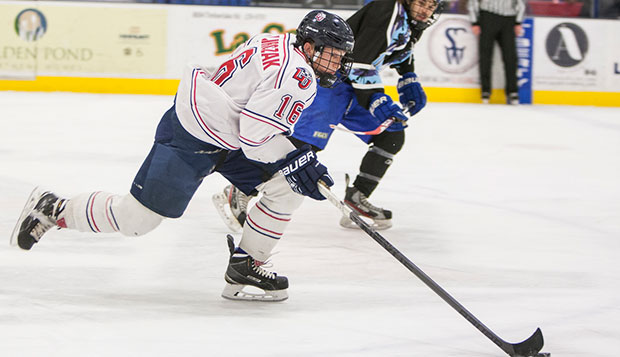 Riding a six-game second-semester winning streak into its opener against Florida Gulf Coast, the No. 1 ranked team in the Southeast Region, Liberty University's ACHA Division II men's hockey team fell for the fourth time this season to the Eagles, 5-3 Friday night at the LaHaye Ice Center.

The seventh-ranked Flames lost to FGCU in the final game of the DII Showcase, Oct. 12 at the LaHaye Ice Center, 6-1, before playing the Eagles more competitively in 8-5 and 6-3 setbacks at Germain Arena in Estero, Fla., on Oct. 24 and 25.

"It was a lot closer than the last game," said sophomore forward Docksteader, who scored two of the Flames' three goals, with the first netted by junior forward Peter Kazmierczak.

What must Liberty do to beat the Eagles in Saturday's 3 p.m. regular-season finale at LaHaye?

"We've got to play stronger defensively and bury every chance we get," Docksteader said.

"We can't be pinching on defense," he added of trying to force steals by overplaying FGCU's forwards. "They're way too fast of a team. We have to have two or three guys back at all times."

The Eagles (24-0), who have played all three of their road games this season at Liberty, capitalized on two fast-break opportunities in the first period, using their speed to skate past the Flames on transition.

"First period, exactly what we didn't want to happen, we gave them two gifts," Flames Head Coach Chris Lowes said. "They had two odd-man rushes and they made us pay for it. We tightened up a little bit that period, and were unfortunate to give up that late one (in the second) on the penalty kill."

With less than two minutes left in the second period, and less than 30 seconds left on the Eagles' power play, forward Nick Houser extended FGCU's lead to 4-2 on a follow of a breakaway shot by defenseman Mike Chemello. The puck ricocheted off the skate of Liberty forward Paul Ingles right to Houser in the right crease, where he slammed it past Flames goalie Blair Bennett (31 saves).

Docksteader got Liberty back within one goal with his second score less than two minutes into the third, pocketing a follow of his own blocked shot into the upper-left corner of the cage past Eagles goalie Mike Reed.

But after the Flames pulled Bennett for the final minute, FGCU — the highest-scoring team in the Southeast with 168 goals in 24 games (7.0 per game) — padded its lead with a steal and empty-net score by Nich Schilson from beyond the red line with 43 seconds left in regulation.

The teams meet again in Liberty's regular-season finale, Saturday at 3 p.m. at LaHaye, before the Flames have two weeks to prepare for the Feb. 13-15 Mid-Atlantic Collegiate Hockey Association playoffs.