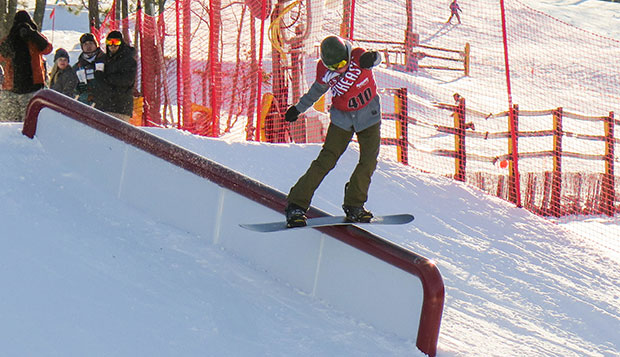 Liberty senior Isaac Gibson lands a trick off a rail feature in the slopestyle competition at Massanutten Resort on Jan. 10.

Liberty University's ski and snowboard team will compete in its second slopestyle event of the season, Saturday at Beech Mountain hosted by Appalachian State University, before having its only opportunity to enter a boardercross competition, Sunday at Appalachian Ski Mountain in nearby Blowing Rock, N.C.

Most of the schools in the Southeast Region of the United States Collegiate Ski and Snowboard Association (USCSA) will be represented at both events, the last two on the schedule before the Feb. 19-21 USCSA Regional competition at Wintergreen Resort, where the Flames' 12 travel team members have season passes to complement their dryland training at Liberty Mountain Snowflex Centre.

"Hopefully, it's going to be a good slopestyle setup, bigger than what we had at Massanutten, to help prepare us for (USCSA) Nationals," Liberty Head Coach Ryan Leeds said of the March 1-7 event at Mt. Bachelor in Oregon.

Leeds and the rest of the Flames' coaching staff are excited about Sunday's event, which was featured at last year's nationals. Liberty did not compete in it since it had no prior racing experience, but its riders have been working with assistant coach Dave Promnitz, an experienced boardercross racer.

"Boardercross is a very, very tight race with five to six people dropping at the same time on a banked slalom course with jumps and rollers," Leeds said. "It's an intense event, an adrenaline rush for sure, because you have people right next to you trying to get in front of you and you can get bumped and pushed accidentally."

Liberty plans to send its entire team to nationals and enter as many competitions as possible, including slopestyle and boardercross as well as the Rail Jam, in which it placed second last year, and the Big Air competition, which Tim Steltzer won at Sun Valley in Idaho in 2013.

"Going into it, we kind of begin with the end in mind," Leeds said. "Everything they do has a Nationals perspective behind it because if we're not beginning to look ahead, our season will end in failure. We're always continuing to move forward. Everything is progressive. ‘This is where you are now; this is where we need you to be.'

"Each athlete got a trick list, worked in a progressive manner, with each trick getting harder. Once they accomplish one, they move onto another. Each athlete has different ability levels so we tailor it to each one, with a goal being top-place finish at nationals."

Leeds expects the level of competition at the USCSA nationals to be much more difficult this year compared to last March, when the competition was held in blizzard-like conditions in Lake Placid, N.Y. The Flames were the only East Coast team to make the finals in slopestyle and finished fifth.

He and his staff want the team to progress to the point where they are very similar, ability-wise, as individuals so they can accomplish their goal of a national championship as a team.

"The biggest thing is building in consistency with our guys, that every single run is fluid, that they're able to link trick to trick," Leeds said. "If we can build in technicality and fluidity in their runs, they can be successful."