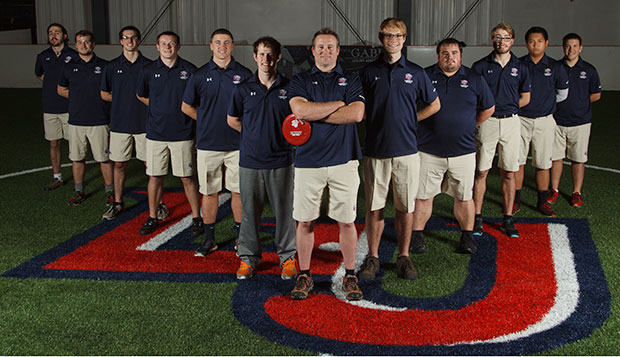 Justin Towns placed second in the advanced division and fellow senior Lance Brown tied for sixth in the open division at this past Saturday's event at Randolph Park in Dublin, Va.

Towns, who's ranked seventh among amateur players with 58 points through four events, recorded rounds of 61 and 57 for a 118 total to finish two shots out of first place. Brown, who's tied for fifth in the open division with 48 points, fired a 61-59-120 to finish in a three-way tie for sixth, eight shots behind the winner.

Daniel Ballard, a graduate student, also entered the open division and shot a 68-61-129 to finish 12th.

"We had a good turnout," Bowman said. "There's a lot more new guys this year, so it was good for them to get tournament experience. We had two in the open division this week, four in the advanced, and a bunch of the new guys in the intermediate."

The BRAWL series is now half complete. It features four more events — Feb. 7 at Sontag in Rocky Mount, Va., Feb. 21 at Elk Creek In Appomattox, Va., Feb. 28 at Devil's Playground in Nellysford, Va. — the same day as Liberty's Flamethrower Invitational on its new course on the other side of Liberty Mountain, set to open in mid-February — and March 14 at Timber Ridge in Bedford, Va.

Liberty, ranked 28th in the latest National Collegiate Disc Golf (NCDG) poll, will seek to defend its title at the fourth-annual Flamethrower. But the Flames have already qualified for the April 14-18 NCDG Championships after capturing the second flight title last spring.