No. 12 Flames travel to Delaware to face No. 17 Blue Hens 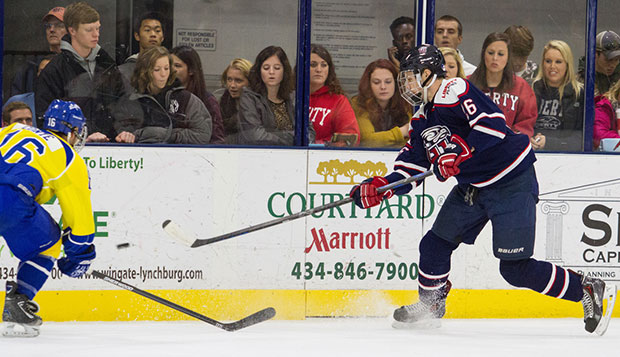 Flames defenseman Peter Shantz (26) works the puck along the boards during Liberty's first meeting with Delaware, Nov. 7 at the LaHaye Ice Center.

Liberty University's ACHA Division I men's hockey team embarks on its last road trip of the regular season today, traveling to the University of Delaware for games Friday and Saturday night at Fred Rust Arena, site of the 2011 and 2014 ACHA Division I National Championships.

The Flames will have to adjust to playing on the Olympic-sided ice, where their speed could be a factor in their favor. Liberty has split its last two series with the Blue Hens in Newark, Del.

Both teams are gearing up for one final bus ride on the journey to their final destination — the March 5-9 ACHA DI National Championships at OBM Arena in Strongsville, Ohio, near Cleveland, where Delaware captured its first DI national title in 2012.

After being swept for the first time this season in the LaHaye Ice Center last weekend against No. 3 Ohio, the Flames are now 11-5-3 at home and 7-5-1 away from the friendly confines of their home rink, while Delaware is 5-4-1 at Rust Arena and 7-4-2 on the road.

Liberty scouting report: The Flames will be without freshman forward Luke Hannon, the ACHA DI scoring leader (32 goals, 33 assists, 65 points) who is flying to Chicago on Friday to meet with his Team USA teammates before traveling with them to Spain as the first Liberty representative to compete in the Feb. 4-14 World University Games.

Without Hannon and freshman forward Luke Simon — Liberty's third-leading scorer (16G, 20A) who is sidelined by injury — the Flames will look for a continued offensive spark from sophomore forward Robert Ward, an ACHA DI All-Rookie Team pick last season who rejoined the team in the second semester.

They will also lean on alternate captain Lindsay LeBlanc (the ACHA's second-leading scorer with 15 goals and a league-leading 40 assists) as well as fellow senior forward Ryley Egan (13G, 17A), who netted both goals in the 3-2 second-game overtime loss to Ohio.

Delaware scouting report:  The Blue Hens are currently in third place in the Eastern States Collegiate Hockey League (ESCHL) behind Rhode Island (27-4-2) and Stony Brook (22-5). They are coming off losses to fourth-place West Chester and fifth-place Lebanon Valley and are 2-5 in the second semester.

Delaware is relying on youth to lead its offense this season as their top three scorers are underclassmen — freshman center Cole Zucker (14G, 12A), freshman defenseman Maxwell Freeman (9G, 14A), and sophomore left wing John Redgate (7G, 16A). Their fourth-leading point-getter is senior defenseman J.C. Brancaccio (4G, 12A), one of the few players still on the roster from the national championship team.

All-time Series: Even after winning three of four meetings with the Blue Hens last season — winning one in dramatic fashion, 4-3 in a shootout, Nov. 9, 2013 at home, before losing the last by 3-2 shootout, Jan. 31 at Delaware — the Flames still trail the overall series, 12-10-2.

Coaches: Kirk Handy, in his 15th season as Liberty's head coach, has an overall record of 326-138-19. Rocky Romanella, a 2010 graduate of Delaware, when he was named team MVP, is 12-8-3 in his first season at the helm of the Blue Hens after previously serving as an associate coach at rival Rutgers and St. Michael's College, an NCAA Division II/III program.