Former Flames defenseman Kuhn warms up to life in Finland 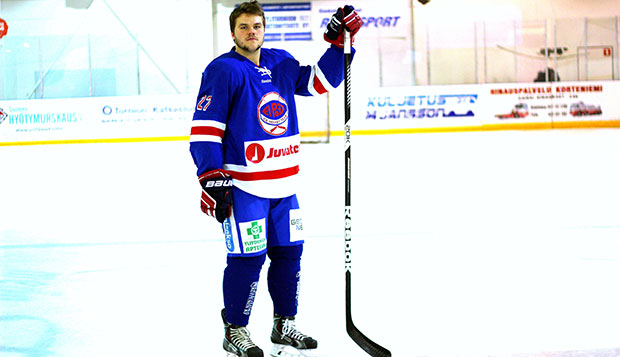 The 22-year-old defenseman, who played at Liberty as recently as this past fall, arrived in the Scandinavian country on Jan. 14, just days after signing a two-year contract to continue his hockey career with ET-PO 72, a professional team based in Ylitornio.

The town of fewer than 5,000 people is located along the Tornio River, north of the Gulf of Bothnia on the border of Sweden. It is farther north than Iceland and on the same latitude as Greenland.

"The opportunity became available, my agent mentioned my name as a possible option, and they jumped on board really quickly," said Kuhn, whose agent is Mike Attard, director of Player Placement International, based in Ontario. "In a matter of 24 hours, I went from meeting with them to being on a plane from JFK International Airport in New York and arriving in Lulea, Sweden."

ET-PO 72, which features 17 players from Finland, three from Sweden, and now one from Canada on its 21-man roster, is currently 12-2-4 and in second place out of nine teams in the Pohjoinen group of Division II, which includes 61 teams throughout Finland.

On Friday, Kuhn traveled with the team through snowy conditions to Rovaniemi, an hour and a half drive west of Ylitornio.

"It was a cool experience for my first road trip," Kuhn said. "I was looking out the window the whole time."

In his first game in an ET-PO 72 blue, white, and red uniform, a 4-3 victory over the Roki Rebels, he played more than 20 minutes on the second defensive pairing alongside Hermmani Solomma, one of the few teammates who speak English.

"They have a massive arena with full bowl seating and it's one of the newest in our league, so it was a really cool experience to start off playing there," Kuhn said.

"It's definitely the highest level of hockey I've ever competed at, and the fastest," Kuhn said, noting most of the teams play in rinks with Olympic-sized ice.

He is easing into life in Ylitornio, which reminds him of his hometown of Parry Sound, though a language barrier exists. Finnish is difficult to learn and English is not widely spoken, but the team manager and Solomma help translate for him in huddles at practices and games.

"The first week was the hardest, but I've gotten into a good groove and feel comfortable now," Kuhn said. "This team is super easy to get along with, so it's been a neat experience coming from Liberty, which is probably the easiest place to fit in. These guys have been much the same. They welcomed me with open arms, so it's nice to feel that I'm part of a team."

Kuhn lives within walking distance of the Plussa Arena, ET-PO 72's 400-seat arena where he practices an hour and a half per day and receives additional individual instruction from Head Coach Nikolai Sikorski, who's from St. Petersburg, Russia.

"The coach is really good and really supportive of having me," Kuhn said. "He likes what I bring to the game. He's really worked me already on my skating and my stickhandling, two parts of my game that can always be improved. I'm excited and have already benefited from working with him."

Kuhn plans to return to Parry Sound for the summer, well before his June 27 wedding to Liberty graduate Dawn Elmers. They will fly back to Finland in mid-August for his first full season with ET-PO 72.

"She's really excited about it," Kuhn said. "It will be a good adventure, a fun thing to experience."

He is eager to find opportunities to share Christ with his teammates and opponents as well as spectators and citizens of Ylitornio, noting ET-PO 72 has a large fan base for a small-town team.

"Everywhere you go, you can be a great witness," Kuhn said. "Many of my teammates understand English and ask me questions about my faith, but the Finnish people are typically very quiet and hold to themselves. They're not as open or seeking (as those in the United States and Canada). That will be one of the greatest challenges, to stay true to the Christian worldview … in a very secular country."