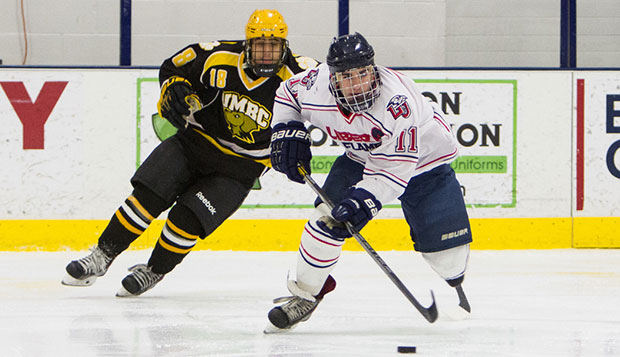 Liberty senior forward Johnny Cotton leaves a UMBC defender in his tracks in Friday night's 9-1 win over the Retrievers at the LaHaye Ice Center.

The Flames got off to a slow start, but freshman goalie Connor Carew and his defense held off the Terrapins until their offensive teammates found the back of the net.

Midway through the third, Ingles tipped in a shot fired by Docksteader from the point for a 2-0 advantage. Minutes later, sophomore forward Jordan Barstead who scored the third and final goal of the night off assists from sophomore forward Kaleb Shannon and senior defenseman Clinton Nigh.

While head coach Chris Lowes was underwhelmed by the team's overall performance compared to its nine-goal outing the night before, he believes the Flames are gearing up to make a strong postseason push.

"It's more about the feel of the semester, because I didn't feel like tonight was a great game for us," Lowes said. "We didn't have that nose for the net and that grind that we had (Friday) night, for instance, but I think overall this semester our practices have improved — the intensity and execution — and I think that bodes well for us."

The additions Liberty has made to its lineup this semester bode well, as well. Both Bierema and Barstead are back to contributing after suffering injuries in the fall, and sophomore forward Ben Freymond is expected to return shortly, too. Shannon and fellow newcomer Ryan Bray have added firepower to the Flames' offense, and senior Blair Bennett adds security between the pipes.

"Offensively, specifically, we've got a deep bench," Liberty Assistant Coach Josh Tucker said. "We've got four full lines of guys that we can trust at any moment in the game; and defensively and goaltending-wise, we're just very confident in everyone's ability."

"I feel like we've added some really nice pieces, and as a team we're really bonding together nicely," Barstead added. "We're starting to click at the right time in order to go deep. I think we could have a good run."

Before the postseason, though, the Flames must go through Florida Gulf Coast University next weekend at LaHaye, with games set for 6 p.m. Friday and 3 p.m. Saturday.