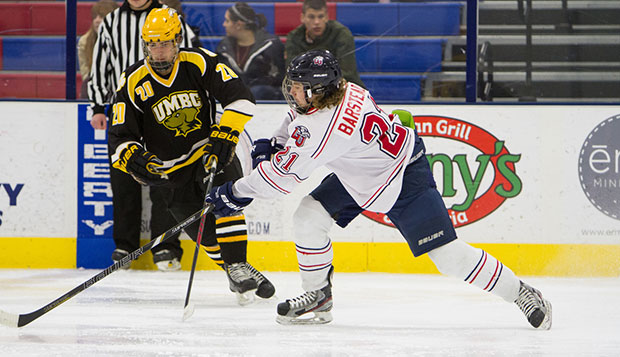 Sophomore forward Jordan Barstead pursues the puck beside a UMBC player in Friday night's 9-1 win at the LaHaye Ice Center.

Liberty University's ACHA Division II men's hockey team began its weekend series at the LaHaye Ice Center with the end in mind, posting a 9-1 win over the University of Maryland Baltimore County in the commanding fashion it will need to clinch the regular-season championship.

The Flames set the tone and executed their system in the first period, but allowed the Retrievers to score first and struggled to put shot opportunities away.

"The first five minutes of the game — the first 10, really — felt a lot like last semester, where we controlled the play and just couldn't finish any chances," Liberty Head Coach Chris Lowes said. "We lost to these guys 3-0 last semester at their rink, and it felt a lot like that again … but the guys were still hungry and confident. It was just a matter of a couple of guys breaking the seal to get that first goal."

It was senior forward Caleb Grow who finally did so, lofting a shot off assists from junior forward Peter Kazmierczak and sophomore forward Kaleb Shannon less than a minute after the Retrievers' score to tie the game.

After killing a five-minute elbowing penalty midway through the second period, the Flames used a five-goal flurry to seize a commanding 7-1 advantage. Sophomore defenseman Ryan Sidun and Bierema set up Ingles for his second goal less than halfway into the period. Newcomer and sophomore forward Ryan Bray scored on assists from sophomore defenseman James Thayer and Kazmierczak with five minutes to go, and junior forward Josh King added a goal shortly after, assisted by sophomore forward Jordan Barstead and senior forward captain Johnny Cotton.

With less than a minute to go before second intermission, senior defenseman Lucas Ebel and Ingles set up sophomore forward Devon Docksteader to stretch Liberty's lead to 6-1. Docksteader, along with Bierema, returned the favor seconds later, assisting Ingles' third goal.

The final period saw Ingles score a power play goal set up by Docksteader and Roulette before Barstead capped off the scoring frenzy off assists from Cotton and Ebel.

While the front lines shined, it was the Flames' defensive execution that set the tone and maximized offensive opportunities throughout the game. They allowed the Retrievers just 20 shots on goal all night to 41 for the Flames.

"I love our defensive core," Lowes said. "It's got to be one of the deeper ones in the league … we're tough to play in our own end."

"We were definitely on our game tonight," senior defenseman Clinton Nigh added. "We were focused on covering our guys in the defensive zone, limiting their chances to the outside and we worked our way forward (from there)."

Ingles agreed, crediting his teammates for setting him up to score and calling the game the team's best defensive effort of the season so far.

With an eye on the postseason, the Flames look to turn that all-around energy and execution into a regular season championship with a win over Maryland on Saturday at LaHaye, starting at 9:45 p.m.