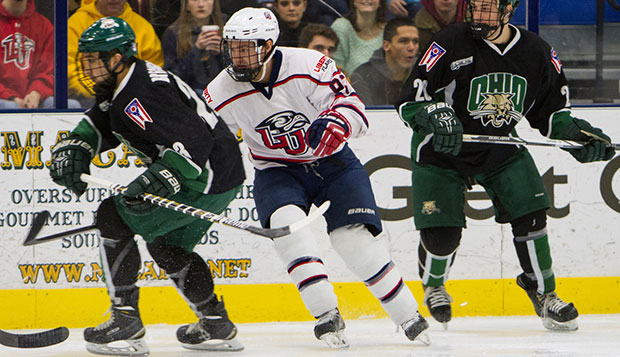 Liberty senior forward Ryan Kerr battles along the boards between two Bobcats during Friday night's opener against Ohio at the LaHaye Ice Center.

Every time Liberty University's ACHA Division I men's hockey team staged a comeback against third-ranked Ohio, Friday night at the LaHaye Ice Center, the Bobcats answered, reclaiming control for a 7-4 victory over the No. 11 Flames.

Patrick Spellacy gave Ohio (23-4-2) an early edge by finishing a cross-crease pass from Joey Breslin past Flames freshman goalie Josh Halpenny inside the right post just four and a half minutes after the opening faceoff.

The Bobcats, who have the top-ranked penalty kill in ACHA Division I at better than 96 percent, extinguished the Flames' five-on-three opportunity, preventing them from tying the contest before tacking on a second score in the final 24 seconds of the first period.

Senior forward Ryan Kerr and defenseman Cam Bakker had near misses for Liberty on the power play before junior forward Bram Erickson's backhanded chip shot off a cross from freshman forward Luke Hannon barely missed wide of the right post.

Hannon nearly finished a shot off a pass from behind the net by Erickson, but defenseman Mike Kretz cleared the loose puck off the goal line behind Ohio goalie Aaron Alkema. Moments later, Bobcats forward Tom Whetsel put away a fast-break pass back from fellow forward Matthew Hartman with a shot from the left crease inside the left post, extending Ohio's lead to 2-0.

"We got a little sidetracked tonight, took some penalties that we would probably want back, missed some assignments," Liberty Head Coach Kirk Handy said. "A couple of goals they scored tonight, (defenseman Peter) Shantz's stick breaks on one, that's a tough break. Ohio worked hard to get their breaks tonight. There were a couple broken plays that went in and we'll fix them for (Saturday)."

Less than five minutes into the second period, Erickson capitalized on a second chance to draw the Flames back within 2-1, pocketing an assist from Hannon after missing a point-blank shot off a feed from senior forward Lindsay LeBlanc. Just 49 seconds later, Grant Garvin sent a long outlet to fellow sophomore forward Robert Ward whose shot from just inside the right circle glanced off the glove of Alkema into the right side of the net.

"Parts of the game, our team worked really hard," Handy said. "I was proud of our guys battling back, being down two goals early."

Freshman forward Colt Steele crashed into Alkema after missing a breakaway opportunity to give the Flames their first lead moments later. Given the reprieve, the Bobcats, who outshot Liberty 46-32, retaliated on the first of three goals by Breslin. His shot slipped past Whetsel and squirted through the five hole to put Ohio back on top to stay with 7:15 left in the second period.

"We had our chances to score tonight and sometimes just weren't able to find the back of the net," Handy said. "(Saturday) will be a different story."

Less than three minutes later, defenseman Tyler Benson converted on a power play with a slick shot past Shantz in the top of the left circle to boost the Bobcats' lead back to two goals at 4-2.

Then, in the opening minute of the third, Breslin unleashed a shot from inside the right circle as Liberty junior defenseman Steven Bellew flipped him over. The puck deflected off Halpenny's glove and rolled in behind him for a 5-2 Bobcats' advantage.

Flames freshman defenseman Ben Hughes got one goal back by ripping a shot on a four-on-three power play from near the right blue line that deflected off a defenseman screened by Ward. However, Ohio needed just 35 seconds to respond on a goal by Hartman, who made a nice move from near the boards and finished with a backhander past Halpenny after Shantz's stick broke in the right circle.

Breslin completed his hat trick before Flames senior defenseman Matt Sherry capped the scoring off an assist from Bellew.

"I thought we were able to do a lot of things well tonight," Handy said. "We like our team and we have confidence in them coming back and regrouping. Our team's battle-tested all year and it's a great opportunity for us again (Saturday) night."

The puck drops at 7 p.m. for Saturday's rematch, when sophomore goalie Matt Pinel will make his first start in nearly three months for the Flames, who will attempt to salvage their seventh straight split of an ACHA home series this season.