No. 1 Flames coast into quarterfinals at NCWA National Duals 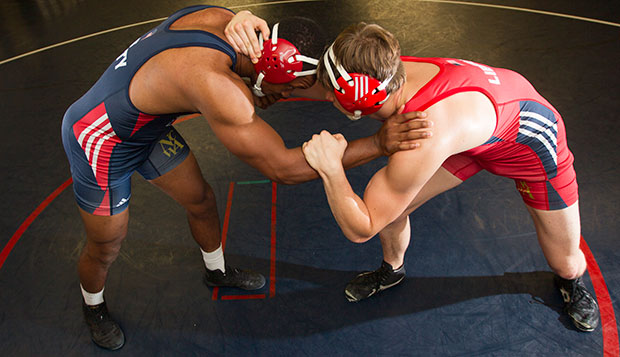 With the experimental optional scoring system in effect for the opening-round matches of pool play, the top-seeded Flames dominated Florida Gulf Coast University, 154-20, and Texas A&M, 164-6, to advance to the 16-team championship bracket. Optional scoring factors individual match scores into the team totals and awards 16 points for forfeits and 15 points for falls, injury defaults, and disqualifications.

In the rout of Texas A&M, Liberty took advantage of six forfeit wins and pins by 133-pound freshman Tyler Sigler over Lance Messersmith in 1:36, 141-pound freshman Jonah Swinson over Emmitt Panya in 2:52, 157-pound senior Josh Sanders over Robert Gaddis in 5:46, and 165-pound freshman Cody Richmond over Jacob Black in 2:06.

Then in the first round of the championship bracket, normal collegiate scoring was used and Liberty defeated Connecticut, 52-6, with pins recorded by Sigler in 42 seconds over Thomas Funk at 133 pounds and Sanders in 1:52 over Christian Donelly at 157. That set up a quarterfinal bout against North Florida, a 33-18 winner over South Florida, on Saturday at noon.

"I rested a lot of my first-string guys with injuries, trying to save them for (Saturday)," Flames Head Coach Jesse Castro said. "A lot of my backup guys did really well today. Josh Sanders was probably the standout. He wrestled up a weight class and he's wrestling really well. He's won two recent tournaments so he's on a roll right now."

The Flames will be without 149-pound junior Peter Tatanish and 174-pound freshman Josh Llopez, sidelined by injury. After winning the national duals in 2012, their first season in the NCWA, the Flames placed second in 2013 and third last season.

Based on their finish, Liberty will earn points toward the team totals at the March 12-14 NCWA National Championships in Allen, Texas, with 24 points awarded to the winner, 23 for the runner-up, 22 for the third-place team, and so on.

Full results from Friday's matches are available online and Saturday's action and updates can be followed on Twitter: @ncwa or through live webcasts on flowrestling.org.