No. 11 Flames await home showdown with No. 3 Bobcats 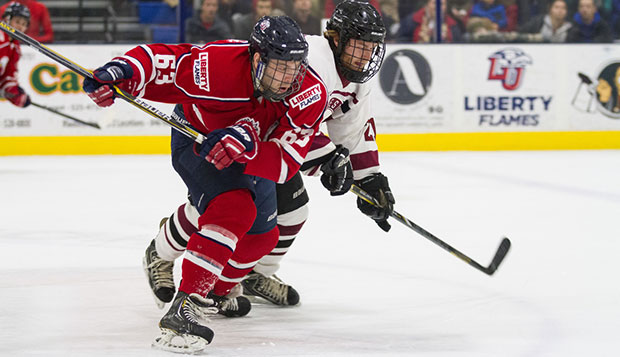 Liberty University's ACHA Division I men's hockey team has played some critical games in recent years against Ohio University, a four-time ACHA DI national champion. The two teams have only faced off five times in the nine years since the Flames joined the DI ranks in 2006, with all five battles with the Bobcats being waged in the past three seasons.

Before sweeping a two-game series from Ohio at Bird Arena in early October last season, Liberty knocked Ohio from the No. 1 perch in the ACHA DI poll in the teams' second meeting, Oct. 27, 2012 at the LaHaye Ice Center. That snapped the Flames' six-game losing skid and the Bobcats' 11-game winning streak.

However, Ohio exacted a measure of revenge that season, defeating Liberty, 7-4, in the second round of the 2013 ACHA DI National Championships at the Edge Ice Arena near Chicago by scoring three power-play goals in the third period to cap a rollercoaster season for the Flames.

While Ohio has gotten off to a flying start under first-year coach Sean Hogan, and are ranked No. 3 in this week's ACHA DI poll, this season has had its share of ups and downs for Liberty. While they haven't experienced a losing streak longer than four games, the Flames haven't won more than four in a row either. Liberty has split all six of its home series against ACHA opponents, going 1-5 on Friday nights and 5-1 the following Saturdays. That's a pattern that continued in last weekend's matchups with unranked Rochester (Mich.), which won the opener, 2-1, before losing the rematch, 7-3.

If they are to meet again this season after this weekend, it would be in the ACHA DI National Championships near Cleveland, where Ohio would have a slight home-ice advantage. The Bobcats are 17-0 at home this season and only 5-4-1 on the road.

But they will be without third-leading scorer Luke Simon (16G, 20A) — who was honored by the ACHA in its Midseason Awards Corner as one of the league's top freshmen — until mid-February after he suffered a lower leg injury in practice in early January.

Other Flames have increased their offensive production to pick up the scoring slack, including junior forward Bram Erickson, who netted two goals in Saturday's win over Rochester, senior forward Ryley Egan, who had Liberty's only score in the opener, and senior Cam Bakker (9G, 19A), who now ranks first among defensemen in scoring ahead of freshman Ben Hughes (7G, 20A), and senior captain Matt Sherry (6G, 8A).

Ohio Scouting Report: The Bobcats boast the best goalie tandem and defensive corps in the country, limiting opponents to just 36 goals in 28 games this season (1.29 goals per game). Their No. 2 goalie, Ryan Heltion, ranks No. 1 in the nation in goals-against-average (1.04) while Aaron Alkema, who has spent the most time between the pipes, ranks fifth with a GAA of 1.52. Both have recorded two shutouts.

Ohio forwards and leading scorers Michael Harris, a junior with 19 goals and 12 assists, and Joe Breslin, a sophomore with 12 goals and 18 assists, will join Liberty's Hannon and Bobcats senior defenseman  Tyler Benson on Team USA at the Feb. 4-14 World University Games in Granada, Spain, where Ohio Head Coach Sean Hogan will serve as an assistant.

Last weekend, Heltion outplayed Team USA goalie Matt Cooper of Iowa State, allowing just two goals in a 3-1, 4-1 sweep of the Cyclones as the Bobcats ran their winning streak at Bird Arena to 24 games. Ohio, a four-time ACHA DI national champion, has now won 20 or more games for 22 seasons in a row.