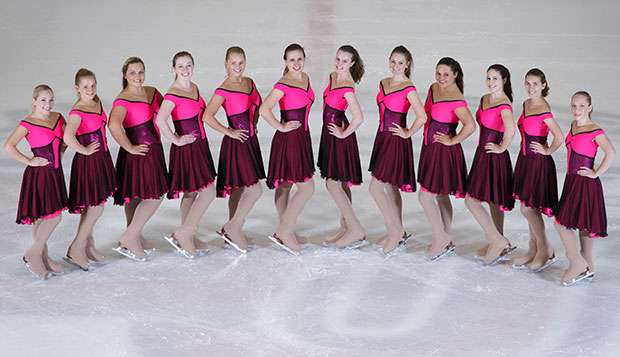 Competing against a challenging field at the Mid-America Skating Championships, Saturday in Fraser, Mich., Liberty University's synchronized skating team showcased the program it will be performing at this weekend's Eastern Sectional Championships in Lake Placid, N.Y.

It was the Lady Flames' first-ever competition in the Midwest, which features many universities with well-established, high-level skating programs.

"Despite many obstacles following the end of the fall semester, the team was still able to come together and represent Liberty with pride and poise … performing with elegance and spunk," Liberty Head Coach Tatiana Payne said. "They were unified in every way possible — mind, body, and spirit. As coaches, we could not be more pleased with how much character and focus was shown by our team."

"This trip definitely helped to establish a strong presence in the Midwest skating world for recruiting purposes and enabled the team to become more cohesive and we feel we have never been better prepared for this weekend's Easterns (Sectionals)," Payne said.

Skating begins Friday at 8:30 a.m. and continues Saturday at 10 a.m. at the Olympic Center rink in Lake Placid, N.Y., site of the 1980 Winter Olympic Games.