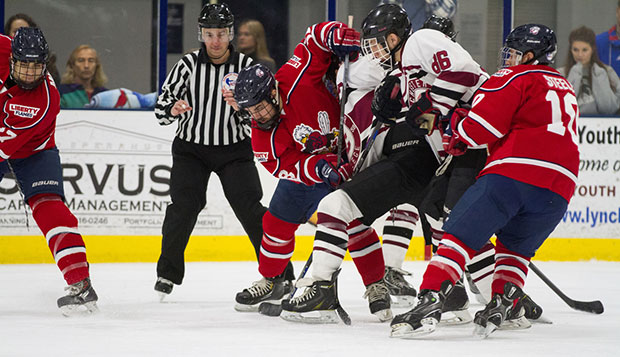 Liberty junior forward Kyle Garcia (18), who scored the Flames' first goal against Rochester, works the puck out of a crowd of players Saturday night at the LaHaye Ice Center.

Rocking the home red "Sparky" jerseys for the second night in a row, Liberty University's ACHA Division I men's hockey team came out with fire in their eyes for Saturday night's rematch with Rochester (Mich.).

The Flames (18-8-4) scored four goals in a seven-minute stretch midway through the second period to break open a close game in a 7-3 win over the Warriors. Freshman defenseman Ben Hughes scored a goal and distributed three assists and junior forward Bram Erickson moved up to the top line, playing alongside freshman Luke Hannon and senior Lindsay LeBlanc, and scored two goals to spark the attack.

"Ben had a strong game for us and I thought Bram Erickson had his best game as a Flame in the three years he's played here," Liberty Head Coach Kirk Handy said. "He made some great plays and had a fantastic shot. He was at his best."

Handy was pleased to see the Flames dictate the tempo of the game from the start, something they failed to do in Friday's opener against the Warriors.

"When our guys came to the rink today, there was just a different energy about them," he said. "That translated into a great first period. We had 18 shots on goal to their eight and the first 10 minutes of the period it was 11-1. I liked our game from the beginning of the game."

Junior forward Kyle Garcia gave Liberty a 1-0 advantage with 8:51 left in the first period when he received a short pass from Hughes and rifled a long wrist shot from the high slot inside the upper left post.

The Flames, who wound up outshooting the Warriors 51-23, opened the floodgates starting with 12:55 to go in the second period when Hughes one-timed a cross-crease feed from LeBlanc into a wide open left side of the net.

Three and a half minutes later, Liberty extended its lead to 3-0 on a fast break when LeBlanc played the puck back to Erickson who sent a rocket past Rochester goalie Zakk Olvin.

"It started with the D-zone getting the puck out quicker tonight than it did last night," Erickson said. "Once it was down at the other end, we just had to bear down and put it in the net. It helps when you can get them quick like that and get a couple of them. We just had to lean on our sticks and finish the opportunities we had."

Just 51 seconds later, Hughes sent a long outlet to defensive linemate Bakker who skated past the blue line before threading a low shot through traffic past Olvin to make it 4-0.

"We had sustained pressure," Handy said. "Patience was important for us tonight. That first goal was a big one and we started to roll from there. In the second period, you could feel the energy, especially the one Bakker scored, that was kind of the back-breaker."

Hannon, the leading scorer in ACHA DI, netted the Flames' next two goals on powerful slapshots from out in front, the first off a tick-tack-toe combination from Hughes to LeBlanc behind the cage to Hannon, who deposited the puck top shelf for a commanding 5-0 advantage.

After Christopher Williford finally put the Warriors on the scoreboard with a wide-open shot from in the right circle past Liberty senior goalie Cary Byron and Doug Lindensmith capitalized on an open lane for a power-play goal under the crossbar late in the second, Hannon struck again in the opening minute of the third. He one-timed a rebound of a shot by Erickson that rolled right to him in front of Olvin into the upper netting to all but seal the victory, boosting the edge to 6-2.

"It was just a matter of time before Luke put them in," Handy said. "I thought Bram (Erickson) opened up some more space on that line for Hannon. He hit hard on the forecheck and was able to cause some confusion, especially on the one Luke scored when he came in and made a play at the net."

Rochester defenseman Joshua Botimer snuck a shot from the right circle past Byron to give the visitors a glimmer of hope at a comeback, but the Flames extinguished it when Erickson pocketed a loose puck left out in front by sophomore forward Grant Garvin for the final score.

Next weekend, No. 11 Liberty is back in action at LaHaye when it hosts the fifth-ranked Ohio Bobcats, coached by former Arizona and Oakland head coach Sean Hogan.