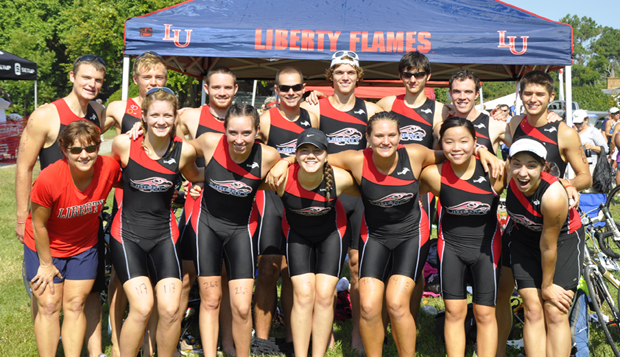 One-two finish by men's and women's LU Tri teams in the Big Lick Triathlon adds to the team resume.

Liberty University's first Triathlon team was created in the fall of 2009 under the leadership of first-time coach Beth Frackleton.

What began as something small, the triathlon team has quickly become one of Club Sports fastest growing competitive sports. During the first year of the program, the team consisted of seven competitors and only gained two more in their second year.

Now in the third season, there are 16 students on the team, including a student from Zimbabwe who came to Liberty specifically to race triathlons.

"The team has grown so much that we are now cramming bikes into the trailer," Frackleton said. "But, I am excited about the growth, and with each year, we've been able to get better through training and racing."

The team also encourages beginners to come and learn about the sport and train to compete.

One of the biggest obstacles that the team faces is the cost of equipment. Previously, each student was asked to purchase a bike and other items needed for the races.

Through the support of LU Club Sports, the triathlon team has been provided with new bikes this year. With three new bikes, the team is able to allow new members to use the bikes to train, while keeping the cost of joining the team down.

This summer, two of the athletes won nationals and qualified for the New Zealand world championship. This past Saturday, the LU Tri team competed in the Big Lick Triathlon at Smith Mountain Lake. The men's team placed second, the women placed first and the team placed second overall.

"We want to leave an impression wherever we go and have Liberty be known for its triathlon team," Frackleton said. "And so far, we've been successful in doing that."