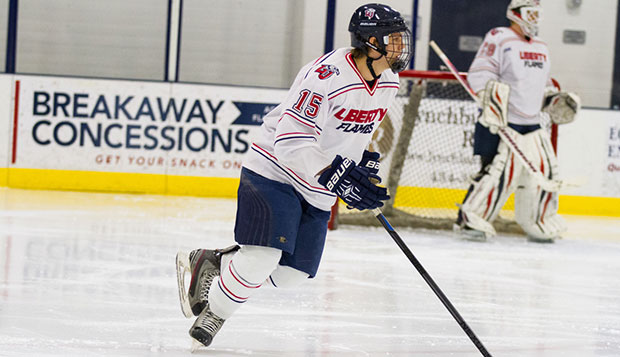 For the second day in a row, Liberty University's ACHA Division I men's hockey team overcame a first-period deficit to defeat a Mid-Atlantic Collegiate Hockey Association (MACHA) opponent, Saturday afternoon at the LaHaye Ice Center. This time, the Flames (19-7, ranked fifth in the Southeast Region) got a hat trick and two assists from junior forward Paul Ingles in a 7-5 triumph over eighth-ranked South Division rival Delaware (15-10-2).

Sophomore forwards Devon Docksteader and Ryan Bray, playing on the same line as Ingles, both distributed three assists, with Bray adding his seventh goal in his first four games with the Flames.

"It's not me, it's my linemates," said Bray, who focused on his studies his first three semesters at Liberty before joining the team this month. "It's an awesome honor and a blessing to be able to play with them and to be a part of this team. The guys have accepted me as a rookie and as a second-semester kid, they've just picked me up and taken me in as one of their own. It's been a lot of fun."

Junior forward Peter Kazmierczak added a power-play goal and an assist in the second period, which started with sophomore defensemen Ryan Sidun and Adam Gnatowski sandwiching goals around a score by Delaware forward Nathan Marks, who netted a hat trick of his own set up by three assists from Mark Zeszut, a former DI player for the Blue Hens.

Marks' first and third goals came with a man advantage, which is something the Flames tried to avoid after being burned by Delaware's power play multiple times in the Nov. 21 overtime loss in Newark, Del.

"Coach (Chris) Lowes made an emphasis in the locker room (before the second period) that we needed to stay out of the penalty box and stay five-on-five because we were beating them and that's exactly what we tried to do the entire game," Bray said. "Even though we took a couple bad calls, overall the team stuck together and didn't give up. We battled through adversity so it was fun."

Bray distributed his third assist with 6:15 left in the third period, dropping the puck back for Ingles, who fired from inside the right circle past Blue Hens goalie Lewis Brotman inside the left post, extending Liberty's lead to 7-4.

Next Friday and Saturday, the Flames host two more MACHA South Division opponents, UMBC and Maryland, with the puck dropping at 9:45 p.m. for both games.