Late comeback bid comes up short in opener with Rochester 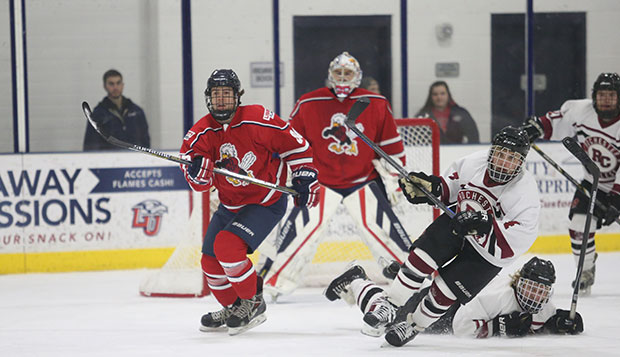 But after cutting the deficit in half with 7:01 to play on a goal by senior forward Ryley Egan off an assist from Cam Bakker, the Flames (17-8-4) couldn't deliver the equalizer in a 2-1 loss to the unranked Warriors (12-12-2). After sophomore forward Robert Ward had his shot from the point blocked, Egan put a high-percentage shot on net from the right wing, and Bakker made a few stabs at the rebound from near the right post, but couldn't poke it into the net.

"We just kind of crashed the net there at the end and just couldn't get the puck over the pad across the goal line," Bakker said. "We were right there, so we've got to come back (Saturday) and put a few more in."

Liberty sported its bright red "Sparky" jerseys for its first home game of the second semester, but the fashion statement didn't seem to spark the Flames' attack in the first period.

The road Warriors struck first at the 10:06 mark when senior forward Matt Kadolph finished a long outlet pass from Doug Lindensmith by lifting a wrist shot past Liberty goalie Josh Halpenny into the top left corner of the cage.

"It was a nice move and it's one that we probably want back, a little bit of a breakdown on our end," Head Coach Kirk Handy said. "We've got a couple things we've got to improve on, to tweak in our game for tomorrow night. We need to get out to a better start. That's going to be a big thing for us, to try to dictate our game to them. They were able to dictate their style of play to us a lot tonight."

The Flames peppered Rochester goalie Zakk Olvin with shots for much of the final 10 minutes, ignited by Kyle Garcia's shorthanded chance on a quick break. Olvin batted down a short wrist shot taken by freshman forward Luke Hannon before freshman defenseman Ben Hughes had his shot blocked in the right crease. Ward nearly scored by lifting a wrist shot while falling down after winning a faceoff in the right circle before sophomore center Grant Garvin's short-ranged shot missed high and senior forward Ryan Kerr launched a shot from near the blue line and narrowly missed on his follow.

"We put 40 shots on goal tonight and had some good opportunities and you'd like to see a few more of those drop," Handy said, noting Liberty outshot Rochester 40-32 but were penalized four times to just once for the Warriors. "Their goalie played well. We aren't discouraged. We know what our team can produce. This wasn't the game we wanted tonight, obviously, but we have full confidence in our team to come back (Saturday)."

In the second period, Liberty generated more shorthanded opportunities off its penalty kill than the Warriors had on their power play, but still had nothing to show for it on the scoreboard.

After starting the second stanza on the offensive, with senior forward Christian Garland and Bram Erickson creating some quality shots on goal, Liberty gave up a counter-attack score five minutes in on Jake Zarzycki's shot in the left crease off an assist from Chris Williford, pushing the lead to 2-0.

Rochester threw off the Flames' offensive system with a different defensive look.

"They played a system where they kind of backed off and let us come at them so we just tried to keep throwing everything on net and hoping for the best," Bakker said. "They were playing a trap and they just kind of dumped it in our end and we had all the time in the world to get to the red line and from then on we kept the pressure up, we just couldn't put the puck in the net.

"They played their system really well, but in the end, you've got to put it in the net."

Despite the setback, which has been a common occurrence on Friday nights at home this season, Handy believes the Flames are making progress and are primed for a strong late-season surge.

"I'm proud of our guys," he said. "We had a lot of good chances and battled right up to the end," Hand. "We just have to make some adjustments and have the energy level you need to be successful in this league. You have to have it night-in and night-out, it doesn't matter who you're playing."

The two teams meet again Saturday at 7 p.m. in LaHaye when the Flames will put a second of their four goalies in between the pipes.

"Halpenny had a good game for us, but we're going to give Cary (Byron) a shot (Saturday) night and we're excited about that," Handy said.